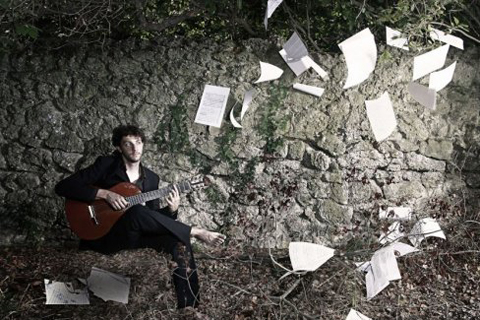 French composer and guitarist, born in 1984

After studying guitar and writing at the Marseille Conservatory, he joined R. Dyens’ guitar class at the CNSMD in Paris. For him, this establishment became a place of discovery and strong artistic encounters as he rubbed shoulders with the classes of analysis, composition and contemporary dance. It was in collaboration with the latter that he wrote his first plays and shows, including Souffle en Silence, given at the Chaillol festival.

Very influenced by the rock music of the 60s and 70s – his scenic energy and his intimate and raw relationship to the recording – as well as by the “music lessons[…] of the sea, the wind, the rain on the trees, the light” (M. Ohana says), Th. Keck directs his writing towards a poetry of the intimate and the purist, towards a spontaneous energy of the movement.

His taste for folk, blues and choral singing in particular quickly led him to write for the voice as a soloist (2 miniatures, L’Arbre Reconnaissant) or as an ensemble (Towards, Cri(s)). It is from this same taste for popular song that musical tales for choir and children’s orchestra emerge: Un conte d’Ici et d’Ailleurs (commissioned by the CFMI of Aix en Provence), À la Recherche de l’Oiseau Rare, Le Voyage de l’Immobile (commissioned by the national education authorities and SIMVVO).