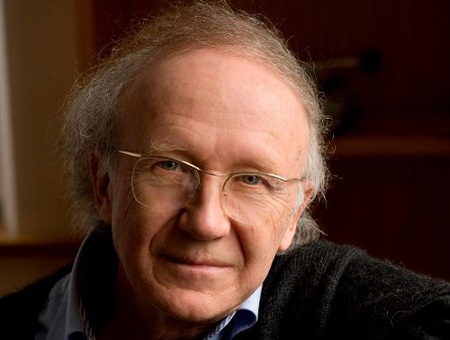 “My entire relation to music is such that I always try to go to the limits.”

Heinz Holliger (b. 1939) is considered one of the world’s leading oboe virtuosos, as well as a noted composer and conductor. He began playing recorder at age four and piano at six. Eventually he switched to oboe, studying with Cassagnaud and Veress at the Berne Conservatory. He then moved to Paris to study oboe with Pierlot, and piano with Lefébure. In 1959 he won a first prize for oboe in the Geneva Competition, and in the same year was hired as an oboist by the Basel Symphony Orchestra. Meanwhile, he studied composition with Pierre Boulez form 1961 to 1963. His career as an international oboe virtuoso began in 1963. His tours included solo appearances, performances with his wife, the harpist Ursula Holliger, and chamber music appearances with the Holliger Ensemble, a chamber group he founded. He was appointed professor of oboe at the Staatliche Musikhochschule of Freiburg in 1965.

He quickly became known as the outstanding oboist of the time. He adopted the smoother, thinner French sound rather than the wider German quality. Even by comparison with the French sound, his tone quality is exceptionally bright. He has a deep understanding for the performance practices of all eras of music, and has garnered particular praise for his mastery of the many extended techniques related to the performance of twentieth century music. He is credited with having extended the technical range of the instrument more than any other oboist. Some of these extended techniques include harmonics, double trills, multiphonics, and glissandos. In interviews he has disputed this accreditation, saying, “I have invented nothing.” He points to instances where these techniques appeared in earlier music, such as an oboe glissando in Mahler’s Third Symphony, but in fact he was the first to make extensive use of these techniques. In addition, he has introduced new sounds attainable only by placing a microphone inside the instrument.

He is very alert to the need for expanding the repertoire of the instrument. He has been critical of oboists for not commissioning challenging new works. He has commissioned works from Berio, Stockhausen, Penderecki, Frank Martin, Pousseur, Henze, Krenek, Jolivet, and Lutoslawski. The Lutoslawski work, the Double Concerto for oboe, harp, and chamber orchestra, written for Holliger and his wife, is considered a masterpiece of 20th century literature.

Holliger began composing when he was young, and has compiled an extensive catalogue in many genres. His music is thoroughly influenced by Schoenberg, Webern and Luigi Nono. Holliger composed The Magical Dances for two dancers, chorus, orchestra, and tape, a work of exceptional aural density and fine nuances. He has also used Indian rhythms to represent specific poetic imagery. In Pneuma (1970) for thirty-six winds, four radios, organ, and percussion, he requires the performers to make specific breathing sounds into microphones, and Cardiophonie uses an amplified stethoscope attached to a solo wind player to add the players pulse to the music. Usually Holliger’s music has a very tight internal logic caused by the strict use of serial procedures, and his musical textures can range from slow, attenuated wisps of sound to combinations of instrumental sound so thick that they practically become “white noise.” His compositions are almost uniformly technically difficult to perform, and highly challenging to listen to.