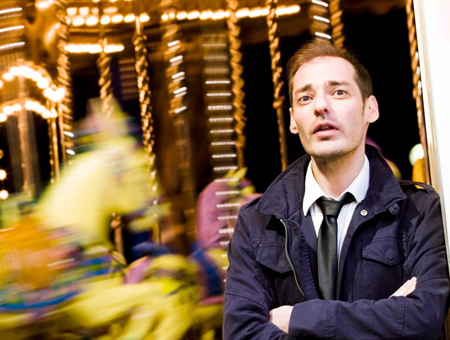 Born in 1968 in Marseille, Régis Campo is a composer who divides his musical creation between vocal, concert, opera and film music. His works are created and performed in Europe and in some thirty countries around the world by numerous performers. His music is often described as playful, full of humor and color.

After studying writing and composition, notably with Georges Bœuf at the conservatory of his native town, and philosophy at the Faculty of Letters of Aix-en-Provence, Régis Campo continued his studies at the Conservatoire national supérieur de musique de Paris with Gérard Grisey where he was awarded a First Prize in composition in 1995. In Paris, he met great independent composers such as Edison Denisov and Henri Dutilleux.

In 1996 Régis Campo was awarded the Dutch Gaudeamus Foundation Prize for his work Commedia. The same year, his brass quintet Exsultate Jubilate received three prizes at the Henri Dutilleux competition. In 1999, the Sacem awarded him the Hervé Dugardin Prize and the Académie des Beaux-Arts – Institut de France – the Pierre Cardin Prize. From 1999 to 2001, Régis Campo was a resident at the Villa Médicis, Academy of France in Rome.

In 2005 the Sacem awarded her the Sacem Prize for Young Composers and the Institut de France, the Georges Bizet Prize. The same year the Ysaÿe Quartet premiered his first string quartet Les Heures Maléfiques at the Beethoven Festival in Bonn. His Second Symphony “Moz’Art” was premiered in September 2005 by the Ensemble orchestral de Paris under the direction of John Nelson at the opening of its 2005-2006 season at the Théâtre des Champs-Élysées.

In November 2008 his cycle of melodies, Le Bestiaire, based on Apollinaire, for soprano and orchestra, composed for Felicity Lott and the Orchestre national de France, was premiered. It was co-commissioned by Radio France and Musique nouvelle en liberté for the Présence festival and the festival Les Paris de la Musique.

The Orchestre symphonique de Montréal conducted by Kent Nagano premieres its orchestration of Erik Satie’s Sports and Entertainment on February 20, 2008 in Montreal.

His first lyrical work, Les Quatre Jumelles, an opéra-bouffe based on Copi’s play for four singers and nine instrumentalists, was premiered in early 2009 at the Maison de la musique in Nanterre and was performed, among others, at the Sylvia Monfort theater in Paris, the national stage in Mâcon, the Grand theater in Reims, the Massy Opera and the Phénix – scène nationale in Valenciennes.

Guest composer at the Auvers-sur-Oise festival in 2009, Régis Campo then composed Eden for violin created by Laurent Korcia and Hommage à Georges Cziffra for piano, by Zoltán Kocsis. In 2010, invited to La Folle Journée Chopin à Varsovie in Warsaw, he composed Sept Humoresques for mixed choir for the Camerata Silesia. In June 2010, the pianist Bertrand Chamayou created at the Festival d’Auvers-sur-Oise his “Étude pour les cordes bloquées”. In January 2011, the Signature label releases a monographic disc “Ombra Felice” with the French string quartet Diotima.