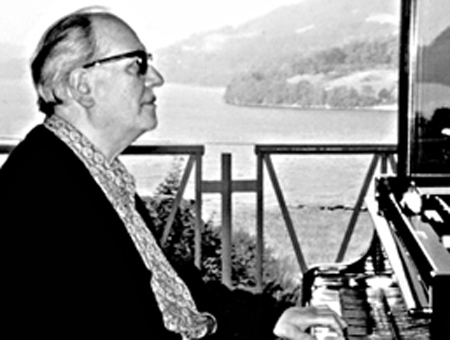 Olivier Messiaen, in full Olivier-Eugène-Prosper-Charles Messiaen, (born Dec. 10, 1908, Avignon, France—died April 27, 1992, Clichy, near Paris), influential French composer, organist, and teacher noted for his use of mystical and religious themes. As a composer he developed a highly personal style noted for its rhythmic complexity, rich tonal colour, and unique harmonic language.

Messiaen was the son of Pierre Messiaen, who was a scholar of English literature, and of the poet Cécile Sauvage. He grew up in Grenoble and Nantes, began composing at age seven, and taught himself to play the piano. At age 11 he entered the Paris Conservatory, where his teachers included the organist Marcel Dupré and the composer Paul Dukas. During his later years at the conservatory he began an extensive private study of Eastern rhythm, birdsong, and microtonal music (which uses intervals smaller than a semitone). In 1931 he was appointed organist at the Church of the Sainte-Trinité, Paris.

Messiaen became known as a composer with the performance of his Offrandes oubliées (“Forgotten Offertories”) in 1931 and his Nativité du Seigneur (1938; The Birth of the Lord). In 1936, with the composers André Jolivet, Daniel Lesur, and Yves Baudrier, he founded the group La Jeune France (“Young France”) to promote new French music. He taught at the Schola Cantorum and the École Normale de Musique from 1936 until the outbreak of World War II in 1939. As a French soldier he was taken prisoner and interned at Görlitz, where he wrote Quatuor pour la fin du temps (1941; Quartet for the End of Time). Repatriated in 1942, he resumed his post at Sainte-Trinité and taught at the Paris Conservatory. His students included Karlheinz Stockhausen, Pierre Boulez, Jean-Louis Martinet, and Yvonne Loriod (whom he married in 1961).

Much of Messiaen’s music was inspired by Roman Catholic theology, interpreted in a quasi-mystical manner, notably in Apparition de l’église éternelle for organ (1932; Apparition of the Eternal Church); Visions de l’amen for two pianos (1943); Trois Petites Liturgies de la présence divine for women’s chorus and orchestra (1944); Vingt Regards sur l’Enfant Jésus for piano (1944; Twenty Looks upon the Infant Jesus); Messe de la Pentecôte for organ (1950); and La Transfiguration de Notre Seigneur Jésus-Christ for orchestra and choir (1969). Among his most important orchestral works is the Turangalîla-Symphonie (1948) in 10 movements—containing a prominent solo piano part and using percussion instruments in the manner of the Indonesian gamelan orchestra, along with an ondes martenot (an electronic instrument). Also notable is Chronochromie for 18 solo strings, wind, and percussion (1960). Le Réveil des oiseaux (1953; The Awakening of the Birds), Oiseaux exotiques (1956; Exotic Birds), and Catalogue d’oiseaux (1959; Catalog of Birds) incorporate meticulous notations of birdsong. He composed an opera, St. François d’Assise, which premiered at the Paris Opera in 1983.

Messiaen’s method of composition is set forth in his treatise Technique de mon langage musical (1944; “Technique of My Musical Language”).