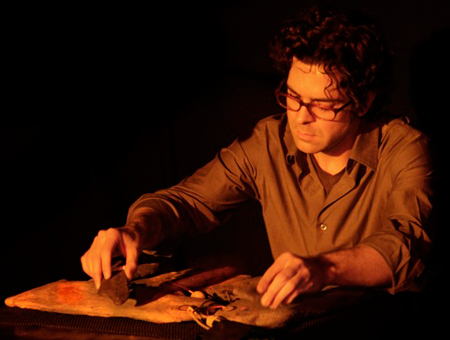 Inspired by natural phenomena and the abstraction of simple stories, Nathan Davis “writes music that deals deftly and poetically with timbre and sonority” (NYTimes), elucidating the acoustics of instruments and the fragile athleticism of playing them.

Davis has written many other works for the ICE and its members, and has received commissions from Steven Schick, The Pew Center for Arts and Heritage, Miller Theatre, the Ojai Festival (for Eighth Blackbird and an installation by sound-sculptor Trimpin), the Calder Quartet, The La Jolla Symphony Chorus, SO Percussion, MATA, and Yarn/Wire.

Nathan spent Winter 2016 as a Fellow at the Camargo Foundation in Cassis, France. He has also received awards from the Fromm Foundation, Meet The Composer, American Music Center New Music for Dance, Aaron Copland Fund, Jerome Foundation, New Music USA, Concert Artists Guild, ASCAP, The Trust for Mutual Understanding, and the ISCM. He and Phyllis Chen won an NY Innovative Theater Award for their score to Sylvia Milo’s play The Other Mozart, for which Davis also received a Drama Desk nomination for Outstanding Sound Design.

Albums of Davis’ music appear on New Focus, Bridge, Tundra, and Starkland, including On the Nature of Thingness and The Bright and Hollow Sky (performed by ICE and one of TimeOut NY’s top 5 classical albums of 2011), flutist Claire Chase’s debut Aliento, 100 Names from Rebekah Heller, Little Things from Phyllis Chen. It has also been broadcast live on SWR2 in Germany and featured on PBS Live from Lincoln Center, NPR’s All Things Considered, on WNYC’s New Sounds Live, KALW’s Then and Now, American Public Media’s The Story, and profiled on WKCR and Q2.

Also an active percussionist, Davis has premiered hundreds of pieces, working with luminaries and fostering emerging composers. He has appeared as a concerto soloist with the Seattle Symphony, Tokyo Symphony, and Nagoya Philharmonic. A core member of ICE, he is an artist-in-residence at the Lincoln Center’s Mostly Mozart Festival and performs regularly at major venues throughout NYC, across the US and Europe, and has toured Russia, Bali, Turkey, and Cuba. He has recorded for Nonesuch, Tzadik, Mode, Kairos, Sono Luminus, Sony Classical, and New Albion.

Davis served on the faculty of Dartmouth College for eight years and currently teaches composition and electronic music at Montclair State University. He has given masterclasses on composition, electronics, and extended percussion techniques at UC Berkeley, CalArts, Rice, Baylor, Yale, and the Akademia Muzyczna in Krakow, Poland, with additional residencies at Harvard, Princeton, UCSD, Brown, and other universities across North America. Nathan received his Masters in Music from Yale University, Bachelors degrees in both composition and percussion at Rice University, and was awarded a Fulbright Fellowship to study at the Rotterdams Conservatorium in Holland.