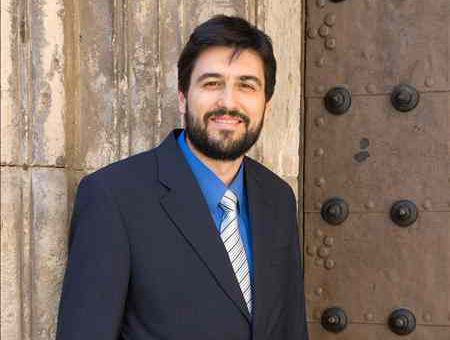 Spanish composer and pianist, born in 1974

He has been honored with awards such as the Queen Elisabeth of Belgium Award, the College of Spain in Paris Prize and the Intercultural Onix Prize of Mexico and he has been finalist of the Pablo Casals Competition of Prades (France) and Honorific Mention at the III Concurso Evaristo Fernández Blanco.

He has taught at prestigious universities, schools and conservatories around the world highlighting the University Rey Juan Carlos of Madrid, the National Autonomous University of Mexico, Escuela Superior de Música de Cataluña, the Royal Superior Conservatory of Music in Granada, the National Arts Centre of Mexico, the Vitrolles Conservatory, Escuela de Música de Cambrils and the University of La Laguna (Tenerife), among others.

Now he is conductor of the Muskfest Orchestra and of the San Andrés Polyphonic Choir in Granada.

He has worked as Director of the Conservatory of Cambrils (Tarragona).

Miguel Gálvez Taroncher has a master degree and graduate in composition and music theory from the University of Vienna, a Diploma in Conducting by the cited School and the title of Professor of Piano by the Conservatory of Madrid and holds a degree in Masters in Business Management at the International School of Management in Granada.