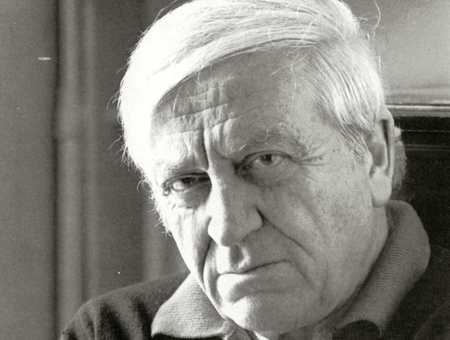 Maurice Ohana was born on June 12, 1913 in Casablanca. As a child, he became interested in Berber musicians from Morocco while being lulled by the flamenco songs of his mother, originally from Spain.

Maurice Ohana did almost all his musical studies in France, while continuing his classical studies. He turned for a while towards architecture, which he abandoned to devote himself entirely to music.

As soon as he was demobilized, he moved back to Paris in 1946. It was at this time that his first works were known in France. With three friends, he founded the Groupe Zodiaque, which set out to defend freedom of expression against the dictatorial aesthetics then in vogue.

Resolutely away from dodecaphonic or serial movements, Maurice Ohana nonetheless pursued a revolution in the broadening of methods and the exploration of sound and the resulting forms.

Faithful to his Andalusian origins, while enlarging their musical essence to universal dimensions, Maurice Ohana has progressed towards a synthesis in which we find the research and preoccupations of contemporary music. First of all as regards the scale, which he frees from the diatonic straitjacket, the rhythm he tends to free from the bar, and the vocal techniques he brings back to their original virtues, outside the grip of bel canto.

He has also contributed to enriching various instrumental fields, notably percussion, with works such as the Silenciaire, the Quatre Études, pieces for the new ten-string guitar, or vocal works such as the Office des Oracles, Cris or Sibylle.

From 1976 on, an uninterrupted series of large-scale works such as L’Anneau du Tamarit, the Mass, the Three Tales of the Honorable Flower, chamber opera, the Book of Prodigies, etc…, lead to this sum that is the Opera La Célestine, premiered on June 13, 1988 at the Palais Garnier.