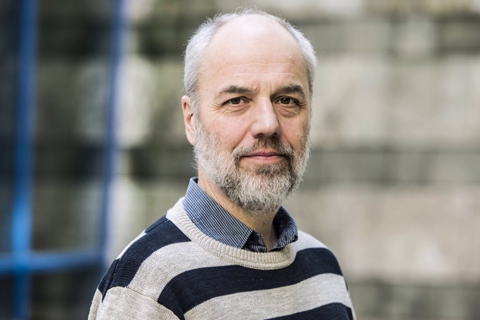 Born in 1959 in Prague, Martin Smolka entered the world of music in the early 1980s when he and Miroslav Pudlák (joined later by Petr Kofroň) founded Agon, an ensemble that in the late 80s and early 90s was the most significant mediator of the world’s musical avant-garde in the Czech scene, which at the time was dominated by the officially backed domestic pseudo-modernism. From the very outset of his career as a composer, we can discern Smolka’s having been influenced by post-Webernism, Minimalism, American experimental music and the Polish School.

In the early 90s Smolka was interested in bizarre instrumental techniques and sound sources (deeply under-tuned strings, old gramophones, various objects in the role of percussion, etc.). Smolka made use of them with a view to stylising the sounds observed in nature and the city. He refers to some of his compositions dating from this period as “sonic photographs” (e.g. 1990’s L’Orch pour l’Orch is in part a “portrait” of night sounds at a shunting yard). Smolka selected real sounds in terms of their expressive charge, stylising them to attain a certain emotional sonic result (eloquent is, for instance, the title of one of Smolka’s strongest pieces: Rain, a window, roofs, chimneys, pigeons and so… and railway bridges, too).

Metaphorically speaking, Smolka’s music oscillates round two poles: 1) Cracked, buoyant conviviality, music of a hobbling orchestrion, symptomatic civilisation sounds, a folk or brass band playing, preferably, out off tune; 2) Melancholic memories, aching desire, the nostalgic echo of the sounds of Point 1. Corresponding to this is the usual structuring strategy of Smolka’s compositions: they almost invariably form juxtapositions of inwardly homogeneous and sharply contrasting form segments, which through their opposition (slow – fast, joyous – sad, tumultuous – gentle, etc.) actually correspond to the “sonata” categories: the main theme – the secondary theme. Smolka, however, frequently works with jarring, film-like, cuts, evolutionism is suppressed, seams admitted, dynamic and textural differences foregrounded, with repetition being the basic principle.
The essentially emotional tone of Smolka’s compositions also relates to the application of micro-intervals serving the composer, on the one hand, to evoke real sounds, on the other, to “detune” traditional harmonic and melodic formations – the motivation for this fundamentally subversive seizure of the inherited material is further amplification or re-awakening of its emotional potential (e.g. Solitudo for ensemble). In the late 90s Smolka focused his attention on this very “recycling” of elements of traditional music deformed in micro-interval terms and arranged in the collage manner (Remix, Redream, Reflight for orchestra or Blue Bells or Bell Blues for orchestra, awarded by the Foundation Prince Pierre de Monaco). Moreover, over the past decade or so Smolka has taken a keen interest in vocal music, especially that for chorus (Poema de balcones for chorus, Psalmus 114 for chorus and orchestra, etc.).

Martin Smolka’s music has mainly been performed beyond the Czech Republic, the country in which he lives. Those to have commissioned Smolka compositions include the most renowned European ensembles and festivals. In Prague, he is above all known owing to his opera Nagano, for which he received an Alfréd Radok Award. Since 2003 he has taught composition at the Janáček Academy of Music and Performing Arts in Brno. He occasionally writes film scores. Martin Smolka studied composition at the Music Faculty of the Academy of Performing Arts in Prague, yet also of crucial significance for him was studying privately with Marek Kopelent.