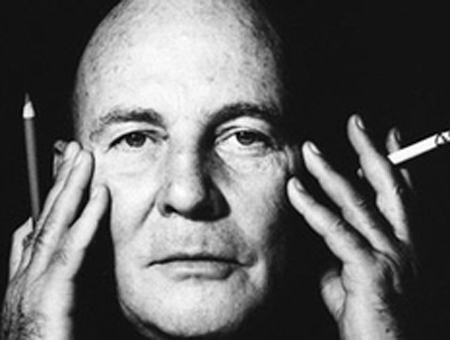 Born in Gütersloh (Westphalia) in 1926, Hans Werner Henze studied piano, harmony and counterpoint there. He began his musical studies at the Staatsmusikschule in Braunschweig in 1942, then worked as an accompanying pianist at the Stadttheater in Bielefeld in 1945 before resuming his studies at the Institute for Sacred Music in Heidelberg where he was a student of Wolfgang Fortner from 1946 to 1948. The Fünf Madrigale for choir and instrumental ensemble (1947) is one of his earliest works from this period of training.

In 1946, he attended the first music academies in Darmstadt, where he met René Leibowitz two years later, with whom he worked intensively. Apollo and Hyazinthus after Trakl, for harpsichord, eight solo instruments and viola voice (1949) testifies to this dodecaphonism teaching. At the same time, he tried to renew his ties with the theater: he collaborated with Heinz Hilpert at the Deutsches Theater in Constance in 1948, where his first opera Das Wundertheater, based on Cervantes, was premiered. In 1950, he became artistic director and conductor of the Ballet of the Staatstheater Wiesbaden, where he composed the opera Boulevard Solitude (1951).

After stays in Berlin and Munich, and more than thirty works of great diversity, he chose to move to Italy in 1953 where he completed his opera König Hirsch. His music is influenced by Italian vocality. He writes for Dietrich Fischer-Dieskau an arrangement of Neapolitan songs Fünf neapolitanische Lieder (1956).

Henze gave master classes in composition at the Salzburg Mozarteum from 1962 to 1967. In the years following the triumphant success of Die Bassariden, premiered in Salzburg in 1966, he turned towards Marxism and displayed his sympathy for the 1968 movement in Germany. He spent a year (1969-1970) in Cuba where he taught and did research. There he conducted his Sixth Symphony in November 1969. This change of ideology is notably translated by the new choices of poets set to music: Hölderlin, Kleist or Trakl are succeeded by the German socialist Enzensberger, Miguel Barnet, a Cuban author who inspired the opera El Cimarrón (1969-1970), and the Chilean Gaston Salvatore.Das Floß der Medusa, a revolutionary oratorio dedicated to Che Guevara, aroused controversy at its premiere in Hamburg in 1968. The cement of the Voices cycle (1971-1973) is, according to Henze, formed more by his opinions and political involvement than by the musical and narrative structure.

In addition, he often collaborates with the Austrian poet Ingeborg Bachmann. She is the librettist of several operas: Der Prinz von Homburg (1958), Der junge Lord (1964), as well as the Fantasy for choir (1964).

Since that time, the composer has accumulated prizes and distinctions as a composer and conductor; he founded the Cantieri Internazionali d’Arte in Montepulciano in 1976, and devoted himself to teaching (composition courses in Cologne in 1980, London in 1987), or collaborating with various institutions (composer in residence at the Tanglewood Music Center in 1983 and 1988, at the Berlin Philharmonic in 1991). In 1988, he took over the direction of the Munich Biennale.

In addition to his major productions for theater, opera and musical theater such as The English Cat (1980-1983, revised in 1990), Henze’s extensive catalog also includes film music, composed, among others, for Resnais and Schlöndorff, about ten symphonies (from 1947 to 2000), concertos, among which the cycle of sacred concertos entitled Requiem (for trumpet, piano and chamber orchestra), numerous pieces of chamber music and soloists.

Among his recent works, less controversial although still engaged, we note in 2003, the successful premiere of the opera L’Upupa und der Triumph der Sohnesliebe, the opera Phaedra in 2007, pieces for large orchestra, among which Sebastian im Traum (2004) and Elogium Musicum (amatissimi amici nunc remoti) for choir and orchestra (2008).