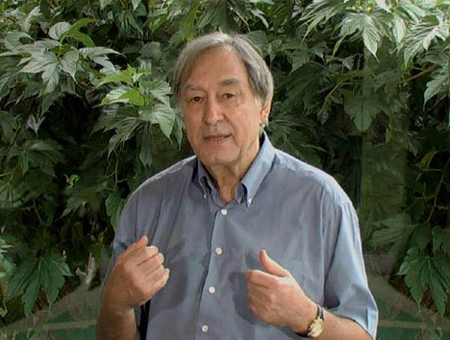 Guy Reibel was born in 1936 in Strasburg. He studied the piano, theory and composition at the conservatory. Also attracted by electronics, physics and mathematics, he started on a scientific path at the Institut Supérieur d’Électronique in Lille and became an engineer. He subsequently completed his musical training with Serge Nigg and Olivier Messiaen at the Paris Conservatory.

From 1963 to 1983 he was a member of the Groupe de Recherches Musicales (GRM), collaborating notably with Pierre Schaeffer on the Traité des objets musicaux. He devised psycho-acoustic experiments founded on the perception of pitch, duration and tone-colour with Henri Chiarucci and thus became aware of his interest in research. He thus turned towards an experimental approach to composition and to that end set up, in 1976, the Atelier Vocal (vocal workshop) of the Radio France Chorus. This small, semi-permanent formation of solo singers became his testing bench for the development of techniques and vocal practice as well as for principles of composition.

Between 1977 and 1986 he was in charge at Radio France of several programmes focussing on contemporary music, its listening processes, practice and pedagogy. He established, with Jean-Claude Pennetier, a department producing ‘Concert Lectures’, a series of thematic musical programmes accompanied by analytical commentaries. He was also the instigator of pedagogic broadcasts such as ‘Éveil à la musique’, ‘Les enfants d’Orphée’ and ‘Microcosmos’.

In addition to his activities in favour of contemporary music on the radio, Guy Reibel has been deeply committed to the musical life in urban environments. In Paris, from 1983 to 1989, he was musical adviser to the Cité de la Musique, in charge notably of audiovisuals and contemporary section of the future Music Museum. With Patrick Moullet, he created the Corps Sonores of La Villette, multi-coloured instrument-sculptures, and then, in 1985, the Omni, an audio-digital musical instrument. Finally, in Montluçon, he devised the Sound Gallery of the future Cité des Musique Vivantes.
As a teacher, Guy Reibel was at first associated with Pierre Schaeffer in the electro-acoustic composition and music research class at the Paris Conservatory. He imagined a pedagogic system of creation and of play as the starting point for musical invention. His essay Les jeux musicaux is, in this regard, a work for teachers, professional choirs, amateurs and children. With François Delalande, he presented a series of activities in music appreciation teaching in the school environment. In 1976 he succeeded Pierre Schaeffer as composition teacher at the Paris Conservatory, remaining there until July 2001.

Guy Reibel has also devoted himself to contemporary music through his activity as a conductor and choral director. He notably conducted, from 1986 to 1990, the Groupe Vocal de France with which he recorded, notably, the complete vocal works of György Ligeti. He also regularly appears with the Radio France Chorus.

The voice, generally dealt with in choral formation and often aimed at amateur groups, holds an important position in his output. He also works on language, notably with Bernard Ucla, at times using poetic texts as pretexts for phonemes, as reservoirs of sounds: Chanson de gesture (1971, to texts by contemporary poets), Ode à Villon (1972). In La naissance du verbe and Les langages imaginaires, he shows that the choice of phonemes is not random and that there are symbolic relationships between the meanings of words and the phonemes.

Guy Reibel also composes electro-acoustic music. He has created works from a few basic sounds subjected to many manipulations and draws the greatest possible variety from derived elements. These pieces are most often abstract, for example Variations en étoiles for tape and percussion (1967); Vertiges, for electric guitar and tape (1969), in which he reveals his taste for high, scraping sounds; also Granulations sillages (1976). In his important Triptyque électroacoustique (Signal sur bruit, Cinq études aux modulations, Franges du signe, 1973-74), he places his skill at the service of more inspirational and more thought out material.

Guy Reibel, finally, has also written instrumental music, some of these works resulting in monumental concerts, such as Les Marseillaise des Mille, a work premiered at the Invalides in July 1992 for the bicentenary of the Marseillaise employing ten orchestras and 500 singers, and Hymne des Nations (1993).