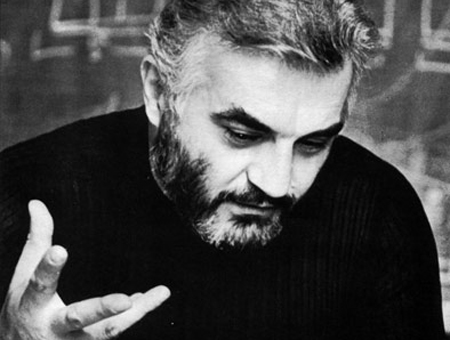 Born in Verona on June 9, 1927, Franco Donatoni began playing the violin at the age of seven and devoted himself entirely to music from the end of high school. He studied composition with Ettore Desderi at the Giuseppe Verdi Conservatory in Milan and with Lino Liviabelle at the Giovanni Battista Martini Conservatory in Bologna. He obtained his choral conducting diploma in 1950 and his composition diploma in 1951. He perfected his skills by following the composition courses of Ildebrando Pizzetti at the Academy of Saint Cecilia in Rome and obtained his diploma in 1953. Finally, he took part in the summer courses in Darmstadt in 1954, 1956, 1958 and 1961.

Franco Donatoni’s early compositional experiments were strongly inspired by the works of Bartók, Hindemith and Stravinsky. Following his meeting with Bruno Maderna in 1953, he went to Darmstadt where he converted to serialism and met Karlheinz Stockhausen and John Cage. The influences of Webern, Boulez, and Stockhausen were to be found in the works of Musica (1955), Composizione (1955), Tre improvisazioni (1956), and Quartetto (1958).

During the years 1960-1961, Franco Donatoni concentrated his research on material and composed chamber music pieces such as For Grilly (1960) and symphonies such as Sezioni (1961) and Puppenspiel I (1961). The following years, influenced by John Cage and Franz Kafka, are characterized by a tendency towards negativism and self-destruction. Refractory to egotism, Donatoni’s style is defined by an attitude of personal withdrawal from the internal logic of writing. Thus, in Quartetto IV – Zrcadlo (1963), Asar (1964) and Black and White (1964), the experience of decomposition leads to a total desacralization of creativity. This reflection on the latent virtualities of musical substance, and on its capacity to undergo certain modifications, takes shape with Babai for harpsichord (1964) and Divertimento II for strings (1965) and leads to the definition of “modifying” principles – Souvenir, 1967 – either accidental – Orts, 1969 -, or obtained by the serial technique – Etwas ruhiger im Ausdruck, 1967.

After a period of silence and depression, the death of Maderna in 1973 gave Donatoni the desire to write again. He then developed a playful and imaginative style and reconciled himself with expressiveness, lyricism and the whims of invention. This new serenity is embodied in the work Spiri (1978).

Franco Donatoni teaches harmony and counterpoint, notably in Bologna and Milan, and regularly participates in summer courses in Darmstadt. Professor of composition at the conservatories of Turin and Milan, as well as at the Chigiana Academy in Siena and then at the Académie Sainte-Cécile in Rome, he exerts a great influence on the young generation of Italian composers. He also gives seminars in Switzerland, France, Spain, Holland, Israel, Australia (Italian Cultural Institute of Melbourne) and California (University of Berkeley).

In 1985, Franco Donatoni was awarded the insignia of Commandeur dans l’Ordre des Arts et des Lettres by the French Ministry of Culture; he is also a member of the Roman Philharmonic Academy and the Academy of Saint Cecilia in Rome.

Franco Donatoni’s works are published by Zanibon in Padua, Schott in London, Boosey & Hawkes in London, Suvini Zerboni in Milan (from 1958 to 1977) and Casa Ricordi in Milan (since 1977).