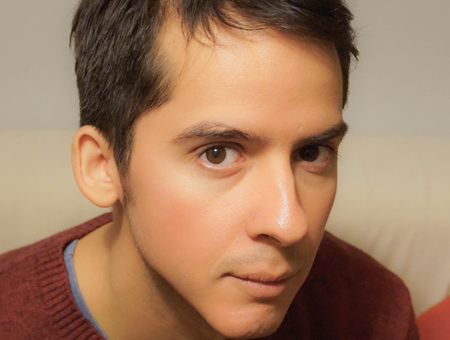 Chilian and Spanish composer born in 1984

After graduating in composition in Alyosha Solovera’s class at the Pontifical Catholic University of Chile, Francisco Alvarado joined the Conservatoire national supérieur de musique et de danse de Paris in 2010 where he studied composition with Stefano Gervasoni and new technologies with Luis Naón and Yan Maresz. From 2013 to 2015, he follows the Ircam Composition Course. His studies are marked by encounters with composers such as Alberto Posadas, Hèctor Parra Esteve, Claude Ledoux, Brice Pauset, Brian Ferneyhough and Chaya Czernowin.

In 2008, he won the Young Composers Competition of the Chilean Symphony Orchestra and in 2009, as part of the INJUVE Young Creation Awards, he won the prize of the Center for the Diffusion of Contemporary Music (CDMC, Madrid). He represents Chile at the World Music Days 2013 in Slovakia with his piece Tricycle.

Francisco Alvarado received a state commission in 2013 for his piece Convergences created at the Abbaye de Royaumont. The opera Maudits les Innocents, of which he composed the last act, was performed in the amphitheater of the Opéra Bastille in December 2014 and his play Karukinka was on the program of the Festival Musica 2015.

His works have been performed by, among others, the Makrokosmos Ensemble, the Xasax Quartet, the Grup Instrumental de València, the Diotima Quartet, the Multilateral Ensemble, the Ensemble C Barré, the Orchestra of Laureates of the Conservatoire National Supérieur de Musique et de Danse de Paris and the Chilean Symphony Orchestra.

His work is currently focused on the interaction between music, the stage and electronics in multidisciplinary projects.

Francisco Alvarado has received scholarships from the Fondation de France, the Tarrazi Fund, the Chilean Government’s Culture and Arts Fund, the Santander Bank and the Marcel Bleustein-Blanchet Foundation for Vocation.