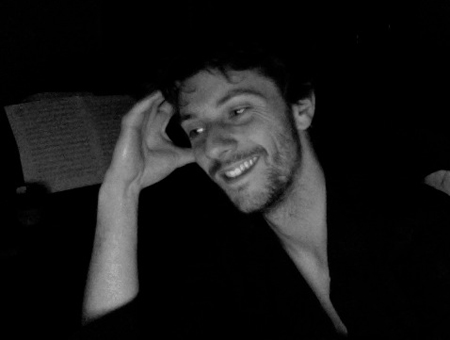 Thomas Keck started playing guitar at the age of 12 and entered the Conservatoire National de Région de Marseille in 2000 in Alexandre Boulanger’s class. There he obtains diplomas of Musical Studies in guitar, chamber music and musical training, as well as the prize of perfection in 2006.

He continued his studies at the Conservatoire National Supérieur de Musique et de Danse de Paris in the class of Roland Dyens, into which he was admitted the same year, while continuing in Marseille, at the Conservatoire à Rayonnement Régional des études d’écriture with Pierre-Adrien Charpy. He obtained a Diplôme de Fin d’Etudes Musicales in 2007.

As a guitarist, he has performed regularly in recitals at the Chaillol Festival, as well as at the Rencontres de l’Hermitage de Cavaillon. In 2007, he was awarded the first Oz scholarship near Montreal, Quebec, which gave him the opportunity to study with guitarists Lorenzo Micheli and Pavel Steidl.

He also performs at the Salle Pleyel as part of the Préludes de Concert organized by the Paris Orchestra, and at the Cité de la Musique, on the occasion of the reopening of the Musée de la Musique. He also participates in the guitar festivals of Antony and Paris, in Salon-de-Provence during the CEIS concerts at the Château de l’Emperi, in Geneva, in the lute and theorbo festival, in the Kagoshima-Chaillol festival in Japan, etc.

His activity as a performer touches as much on ancient music as on contemporary repertoire and musical creation, which he regularly defends within Ensemble C barré, notably by working with composers from various horizons (Mirtru Escalona-Mijares, Jean-Christophe Marti, Pierre-Adrien Charpy, Olga Krashenko, Aurélien Dumont, etc.). This plural approach to the repertoire allows him to extend his playing to include baroque, romantic and electric guitar practice, as well as chromatic and third-tone zither.

His taste for musical creation leads him to develop his own identity as a composer. He has notably written for voice, chamber orchestra, guitar, dance, theater and various chamber formations.