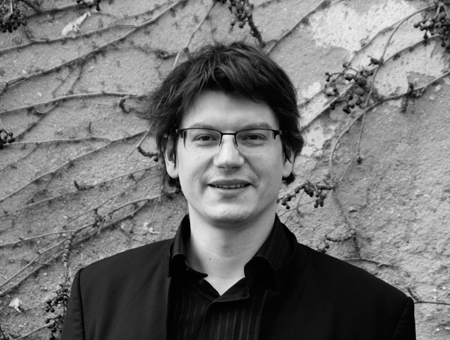 Matthias Champon began playing trumpet at the Harmonie Chablaisienne de Thonon and continued his musical training in Paris: at the Lycée Fénelon, at the University Paris4 Sorbonne, and at the CNSMDP where he obtained his diplomas as a performer and teacher. He also trained at the Academies of Lucerne (Pierre Boulez) and Bayreuth (Pedro Halffter) and from 2007 to 2009 he was Principal Trumpet of the Orchestre des Lauréats du Conservatoire.

Following his collaboration with the conductor Philip Walsh, for the French premiere of Thomas Adès’ Powder her Face, the latter invited him to work at the Festival de Belle-Ile Lyrique-en-Mer, from the summer of 2007 to 2016. Member of the contemporary music ensembles Cbarré (Festival Les Musiques à Marseille, Festival de Monte-Carlo), and the Balcony (Donnerstag aus Licht, by Karlheinz Stockhausen, at the Opéra-Comique in 2018), he is also invited by ensembles such as l’Instant Donné (Kopernikus, by Claude Vivier, directed by Peter Sellars at the Théâtre de la ville in 2018/19/20), Ars nova, TM+, La Grande Fabrique, 2E2M, or Musicatreize (Un Retour, by Oscar Strasnoy, book-disc at Actes Sud, 2010). He practices improvisation on texts (Jérémie Decottignies, Michel Denance), or with dancers (Carte Blanche Patrice Chéreau at the Louvre, duo InSitu with Thierry Niang). He co-hosts with Claire Marchal and Jérémie Decottignies, a program on music, on the radio associative cause-commune.fm. MC is professor at the conservatories of the 13ème and 18ème arrondissement of Paris and is regularly invited to play with French orchestras: the Opéra National de Paris, the Orchestre Philharmonique de Radiofrance, the Ensemble Intercontemporain, the Paris Chamber Orchestra, the Paris Orchestra Les Dissonances, Les Siècles. MC has also played on natural trumpet with several baroque ensembles such as La Rizonanza or Le Parnasse Français.