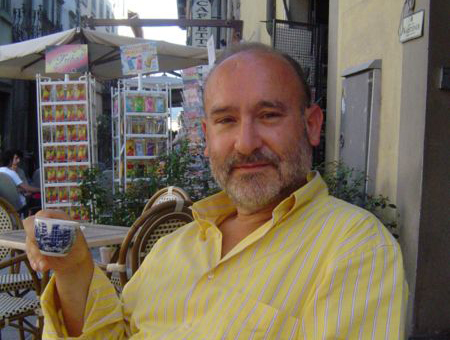 Salvatore Sciarrino (Palermo, 1947) boasts of being born free and not in a music school.  He started composing when he was twelve as a self-taught person and held his first public concert in 1962.

But Sciarrino considers all the works before 1966 as an developing apprenticeship because that is when his personal style began to reveal itself. There is something really particular that characterizes this music: it leads to a different way of listening, a global emotional realization, of reality as well as of one’s self. And after forty years, the extensive catalogue of Sciarrino’s compositions is still in a phase of surprising creative development. After his classical studies and a few years of university in his home city, the Sicilian composer moved to Rome in 1969 and in 1977 to Milan. Since 1983, he has lived in Città di Castello, in Umbria.

He was published by Ricordi from 1969 to 2004. Since 2005, Rai Trade has had exclusive rights for Sciarrino’s works. Sciarrino’s discography is pretty extensive and counts over 100 CDs, published by the best international record labels and very often awarded and noted.

Apart from being author of most of his theatre opera’s librettos, Sciarrino wrote a rich production of articles, essays and texts of various genres some of which have been chosen and collected in Carte da suono, CIDIM – Novecento, 2001. Particularly important is his interdisciplinary book about musical form: Le figure della musica, da Beethoven a oggi, Ricordi 1998.

Sciarrino taught at the Music Academies of Milan (1974–83), Perugia (1983–87) and Florence (1987– 96). He also worked as a teacher in various specialization courses and masterclasses among which are those held in Città di Castello from 1979 to 2000 and the Lectures at Boston University. He currently teaches in the summer masterclasses at the Accademia Chigiana in Siena.   From 1978 to 1980, he was Artistic Director of Teatro Comunale di Bologna.

Academic of Santa Cecilia (Roma), Academic of Fine Arts of Bavaria and Academic of the Arts (Berlin), Sciarrino has won many awards, among the most recent are: the Prince Pierre de Monaco (2003), the prestigious Feltrinelli International Award (Premio Internazionale Feltrinelli) (2003), the Salzburg Music Prize (2006), an International Composition Price established by the Salzburg Land, the Frontiers of Knowledge Prize from the Spanish BBVA Foundation (2011), the A Life in Music Prize from the Teatro La Fenice – Associazione Rubinstein in Venice (2014), the Golden Lion for Lifetime Achievement from the Venice Biennale (2016).