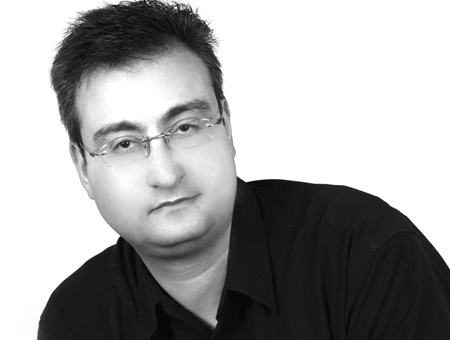 Following a formation at the Catholic Seminary of Beit-Jala (with the objective to become a priest), Haddad continued his studies of philosophy in Belgium, after which music composition in Jordan, Israel and England.

In his works from 2004-2006, Haddad focused on achieving a synthesis between the Western and the Arabic traditions; this has been accompanied by a comprehensive study of the so-called Arabic culture (until today). From 2007-2014, Haddad has been questioning the idea of forgetfulness of the Arabic culture using certain musical techniques which enable filtering memory while introducing elements of oblivion. From 2015 until now, Haddad sees in musical composition an ethical responsability sympathizing with the suffering of other human beings. In addition to clearer Arabic musical traces (which synthesize somehow the two aforementioned periods), melancholy, darkness and some shades of pale light are salient features of this period.

Haddad’s music has been commissioned and performed by most prestigious international ensembles and orchestras in Europe, North America, Asia, Africa & Australia under the batons of Daniel Barenboim, Heinz Holliger, George Benjamin among others.

He served as composer-in-residence to numerous ensembles, orchestras and festivals; was guest lecturer at many universities and was invited at many radio and TV stations.

Many honors rewarded his work including the French and German Prix de Rome 2008-10, the deutsche Schallplattkritik Preis 2010 & the Koussevitzky Music Foundation Commission- Library of Congress 2014.
Haddad served as jury member of ‘The Gaudeamus International Composers Award’ 2020.

His music can be heard on labels such as WERGO, NEOS and Ensemble Modern Medien.
He speaks five languages. Among his current interests are Arabic cultural studies, Carnatic music & sport cars.