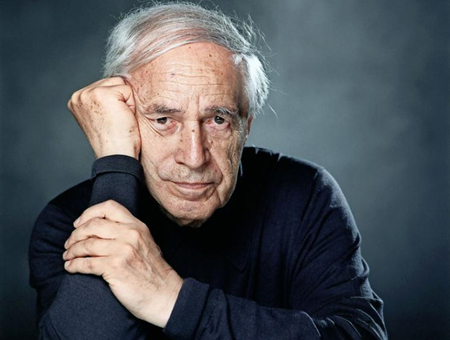 Pierre Boulez, French composer, conductor, and music theorist, was regarded as a leading composer of the post-Webern serialist movement who also embraced aleatory elements and electronics.

As a child, Boulez demonstrated a formidable aptitude in mathematics, but in 1942 enrolled at the Paris Conservatoire. His studies there often ran into difficulties, as he rapidly developed revolutionary attitudes toward all things traditional. Two decisive influences during those years helped to shape his musical personality. The first was Olivier Messiaen, the other was René Leibowitz, who introduced him to serial music, where Boulez found “a harmonic and contrapuntal richness and a capacity for development an extension of a kind I have never found anywhere else.”

By the late 1940s, Boulez began using a technique known as total serialization. One of his earliest works to gain public notice was his Second Piano Sonata (1948), following its performance in concert at Darmstadt in 1952 by Yvonne Loriod, Messiaen’s wife. The piece from the 1950s that sealed his reputation was Le Marteau sans Maître from 1954 (revised in 1955), for singer and chamber ensemble. The instrumentation gives prominence to exotic percussion, extended vocal techniques, and textures that are often brittle, but also lyrical. Rigorously organized, Le Marteau nonetheless goes beyond strict serialism to a more personal style. The premiere took place in Germany in 1955 under Hans Rosbaud, after the Südwestfunk Radio underwrote an astounding 50 rehearsals in order that the piece be performed properly.

During the latter 1950s he began allowing greater freedom for the performer in works like Improvisations sur Mallarmé for soprano and chamber ensemble. In his Third Piano Sonata (1957), the pianist can reorder the five movements in a variety of ways, and certain passages within the movements offer alternate paths, thereby making the artist select which to play and which to omit. In 1957, Boulez embarked on Pli Selon Pli, a work in five movements for soprano and orchestra to texts by Mallarmé, making use of a more restrained open-form technique. Boulez was also known for withdrawing and rewriting his compositions, making nearly everything he wrote a work in progress. For instance, …explosante-fixe…, first sketched in 1971, engendered a number of works and transitory phases over approximately 25 years, including a 1996 version for solo MIDI flute and chamber ensemble. In 2000, he received the prestigious Grawemeyer Award in Composition for his 40-minute chamber piece Sur Incises for three pianos, three harps, and three percussionists.

Boulez was also one of the 20th century’s most influential conductors, known for extraordinarily precise performances of contemporary works by Bartók, Ligeti, Messiaen, and Varèse, among many others. He debuted in America in 1965 with the Cleveland Orchestra, and in 1966 conducted his first operas, Wozzeck and Parsifal, and made his first orchestral recordings. In 1968 he was named music director of both the BBC Symphony Orchestra and New York Philharmonic, where his programs of modern music were often met with harsh criticism. In 1970 French President Pompidou announced the experimental electronic music institute Institut de Recherche et de Coordination Acoustique/Musique (IRCAM) to be under Boulez’s administration, where he remained until the mid-1990s. In 1975, he formed the Ensemble InterContemporain, an ensemble devoted entirely to performing new music, including his own Repons (1980). The following year, Boulez was invited to lead the centenary performances of Wagner’s Ring Cycle at the Bayreuth Festival. Around the same time, Boulez left his permanent conducting appointments, but continued to guest conduct many leading orchestras often. As a conductor, Boulez made many notable recordings; in 1996 he won a Grammy for his recording of Debussy’s La Mer with the Cleveland Orchestra. Active into his eighties, Boulez’s repertoire expanded to include works by such composers as Mahler, Janácek, and Szymanowski. Health issues limited his engagements after 2012, and he unfortunately was too ill to attend celebrations in honor of his 90th birthday. Boulez passed away at his home in Baden-Baden in January 2016.