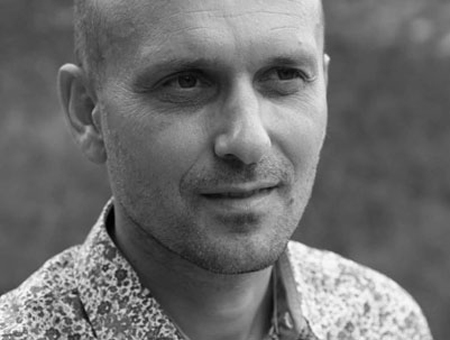 French composer and organist, born in 1972

Pierre-Adrien Charpy’s compositions are open to musical exchange in all its forms – its ears open to contemporary practices, its roots in the soil of musical history, it brings together research into new instrumental forms from electronic to hybrid. Amongst the sixty or so pieces making up his repertory are purely instrumental works for traditional ensembles, chamber ensembles or large orchestras standing next to others for “early” or non-western instruments and even those emerging from the digital revolution.

An active trained organist, he works closely with his performers among whom are regular long-term collaborators. These include his wife, the singer Raphaële Kennedy with whom he co-founded the Da Pacem ensemble specialized in early music, contemporary premieres and dialogue between cultures. There’s also Vincent Bouchot, Serge Bertocchi, Camilla Hoitenga, Marylise Florid, Thomas Keck, Anaïs Gaudemard, Anne Etienvre, the duo Leroy/Moubarak, the trio HOP!, and the Télémaque Ensemble led by Raoul Lay.

Recordings of his La petite sirène and Contes traditionnels/Danemark et Islande, written for the label Frémeaux, were both awarded the Charles Cros Academy’s Coup de Cœur prize. He was Composer In Residence 2004-2006 at the ENM in Aix-en-Provence. His work has been honoured by the Institut de France’s Jousselin-Korewo and André Caplet prizes (1999 and 2001 respectively), as well as the Académie de Marseilles’ Jean-Gabriel Marie and Pierre Barbizet prizes (2005 and 2010 respectively).

He teaches Stylistic Composition at the CNRR at Marseilles. Since 2015 he is also Assistant Artistic Director of the Mars En Baroque Festival with Jean-Marc Aymes and in 2016 he founded the Cypres Label’s (Belgium) discography collection Avec with Raphaële Kennedy and Isabelle Françaix.