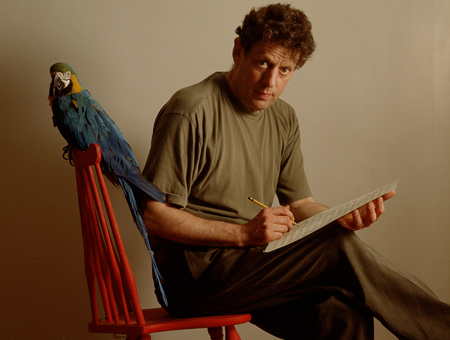 Born in Baltimore on January 31, 1937, Philip Glass discovered music in the radio repair shop of his father, Ben Glass. His father also owned a record department, and when some of his records sold poorly, he would take them home to play them for his children and try to figure out why they were turning customers away. This is how the future composer became familiar with Beethoven’s quartets, Schubert’s sonatas, Shostakovich’s symphonies and other works considered “original” at a very early age, at the same time as he immersed himself in popular music. With this eclecticism of taste, the father simultaneously transmitted a sense of business: Glass, later on, would be one of the first composers to found his own record label.

At the age of nineteen, the young Glass obtained a Bachelor’s degree from the University of Chicago (major subjects: philosophy and mathematics), then attended the Juilliard School, where he met Steve Reich (the two composers would later keep a bond based on friendship perhaps, emulation certainly, at the end of the rivalry). Darius Milhaud, then in the United States, and whose teaching he followed briefly, will undoubtedly encourage him in tonal writing. In 1963, when he returned to France and attended Nadia Boulanger’s classes, he had to start his apprenticeship again, bending to the rigorism of the French teaching of harmony and counterpoint. He accepts a punctual work, for the music of the film Chappaqua, to transcribe the improvisations of the Indian musician Ravi Shankar. He then discovered passionately, with the latter and the tabla player Alla Rakha, the repetitive structures with slow and gradual evolution. In 1966 he travels to India, where he sympathizes with Tibetan refugees and becomes imbued with Hindu and Buddhist philosophies.

Returning to New York in 1967, he settled in Chelsea where he led a bohemian life, notably with Reich, who had already composed his own repetitive works, known as “minimalists”, and set up his own ensemble of musicians. Glass soon played with Reich the works of both of them. Sometimes a plumber or a cab driver, he in turn founded a “Philip Glass Ensemble”. The first style – severe minimalism – will lead him to the mid-seventies and seems to end with Music in twelve Parts. A prestigious commission then comes, which will be followed by a sudden celebrity: Einstein on the Beach premiered at the Metropolitan Opera in 1976.

The eighties, more “maximalist” than “minimalist” as the musicologist K. notes. Robert Schwarz, are largely occupied by the expansion of the dramatic work, first on exotic, mystical, some would say New Age: Satyagraha (1980, “Embrace of Truth” in Sanskrit or principle of resistance through non-violence used by Gandhi) then Akhnaten (1983, built on Egyptian, biblical and Arcadian myths). These years also saw the development of orchestral work, especially starting with the Violin Concerto (1987).

Today, this ever-growing production includes some twenty operas, eight symphonies, numerous concertante works, and a no less impressive quantity of chamber music. The operas seem to culminate with The Voyage (1992), composed for the fifth centenary of the discovery of the Americas, thanks to a commission from the Metropolitan Opera, undoubtedly one of the most richly endowed in the entire history of music. It was followed by three transverse operas that augur well for the current multidisciplinary approach, interesting “grafts” on Cocteau’s cinema, respectively after Orphée (1993), La Belle et la Bête (1994) and Les Enfants Terribles (1996). Glass, “ambassador of learned music” to the stars of popular music, and in this almost unique example, will have rubbed shoulders with (and sometimes collaborated with) Paul Simon, Susan Vega or David Bowie. In 2007, he wrote Book of Longing on a cycle of songs and poems written by Leonard Cohen. He has approached with the same appetite the writing of film music, such as Candyman (1992), Truman Show (1998), The Hours (2003) or more recently Woody Allen’s Dream of Cassandra. The popular-savvy link, it is true, had always inspired Glass’s work, from the very beginning of his music, which used the same electronic keyboards as pop music. Terry Riley, the first American minimalist (along with his friend La Monte Young) was perhaps the initiator of such aesthetic rapprochements, with the founder In C (1964), who toured the clubs of the time. Glass, for his part, digging this furrow throughout his career, will have drawn with several decades in advance the current trend of opening, that of the great aesthetic thaw.