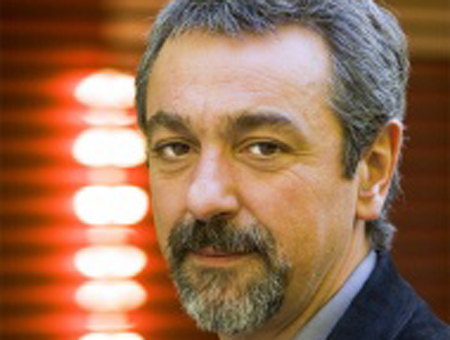 From « Final del Juego » (for septuor and tape, premiered at Radio France in 1983), and which can be considered his first work, and since then, Luis Naón has been seeking to compose according to a dual relationship, inherited from his musical experience in electronics and from his bicultural identity.

His works have been played in prestigious auditoriums and festivals in Europe, America and Asia. They were distinguished by the UNESCO Rostrum in 1990 and 1996, the Buenos Aires town Prize in 1991 and in 1995. He won the SACEM’s « George Enesco Prize »in 2001 and the « Caja de Granada’s Luis de Narváez Prize

The « Urbana », a cycle of 24 works, was born a few years ago. It crystallizes under this title trough « Urbana » for accordion, percussion and real time premiered in Ircams’s festival Agora in 1998. This cycle consists of several stages whithin the chamber opera trough orchestral pieces.
He composed for the opening of TAC (Theatre Auditorium Poitiers) the entire music for the « Princesses » a ballet, mainly choreographically conducted by Odile Azagury which includes many diferent works for electronics and instruments.

His most recent works, “Around the Bell”, “Ebano y Metal”, “Ultimos Movimientos” and “Parentesis” were premiered at Moscow, Geneva, Venice and Mexico city.
“Quebrada/Horizonte” for large orchestra and “Pájaro al borde de la noche” for cello and ensemble have been premiered at the Festival Presence (Radio France).
He is now working on his 3d string Quartet for Diotima at the ICST Zurich & the Ircam.

His works are edited by Henry Lemoine, Gérard Billaudot and BabelScores.