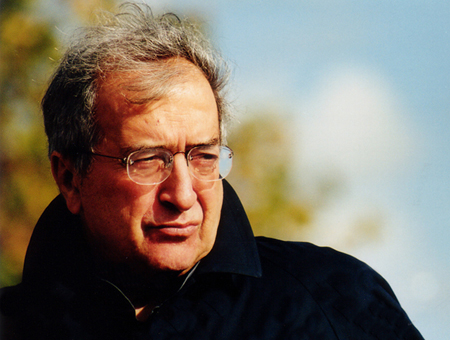 Luciano Berio was born at Oneglia, Liguria, on 24 October 1925 into a family in which music was a long-standing tradition. Both his father Ernesto and his grandfather Adolfo were composers, and he took his first steps in music with them.

In 1945 he moved to Milan, where he attended the Conservatorio «Giuseppe Verdi», studying composition with Giulio Cesare Paribeni and Giorgio Federico Ghedini, as well as conducting with Carlo Maria Giulini and Antonino Votto. In 1952 he attended the courses taught by Luigi Dallapiccola at Tanglewood, USA. From the early fifties Berio made a name for himself as an authoritative exponent of the new generation of the musical avantgarde. This period saw the composition of Cinque Variazioni (1952-53), Chamber Music (1953), Nones (1954) and Serenata (1957).

In December 1954 Berio and Maderna created Italy’s first studio of electronic music at the RAI Milan headquarters, inaugurated the following year as the Studio di Fonologia Musicale. Here he was able to experiment with the interaction of acoustic instruments and electronically produced sounds (Momenti, 1957; Différences, 1958-59) and explore new relationships between sounds and words (Thema. Omaggio a Joyce, 1958; Visage, 1961). Moving into the sixties, Berio was exploring further complex combinations of timbres (Tempi concertati for 4 soloists and 4 orchestras, 1959; Sincronie for string quartet, 1964). His investigation of the expressive resources of the female voice – prompted by the voice of Cathy Berberian – proceeded with Epifanie (1959-60, incorporated into Epiphanies, 1991-92), Circles (1960) and Sequenza III for voice (1965). The dramatic dimension of these vocal works was made more specific and refined in his first works for theatre such as Allez-Hop (1959, with Calvino), and Passaggio (1962) and Laborintus II (1965), both with texts by Sanguineti.

In 1958, with Sequenza I for flute, he began an exploration of the idiomatic potential of individual instruments which was to produce the 14 Sequenze for solo instruments (the last, for violoncello, was completed in 2002-03). This series of solo works with the relative Chemins – elaborations for instrumental ensemble of some of the Sequenze – exemplifies Luciano Berio’s approach to composition as “work in progress”, conceived as a potentially never-ending process of comment and elaboration which continues and proliferates from one piece to the next. In his compositions for large symphony orchestra he explored new spatial layouts (foreshadowed in the fifties in Alleluja I and Alleluja II) and new instrumental formations: Eindrücke (1973-74), Bewegung (1971/83), Formazioni (1985-87), Continuo (1989-91) and Ekphrasis (Continuo II, 1996). The dialectical relationship between solo instrument and orchestra is at the heart of works such as Concerto for two pianos (1973); “Points on the curve to find…” for piano and chamber orchestra (1974), which became Concerto II (Echoing curves) for piano and two instrumental groups (1988-89); Voci (Folk songs II) for viola and two instrumental groups (1984), and Alternatim for clarinet, viola and orchestra (1994). The concerto was not the only traditional genre Berio reworked; he also tackled the string quartet (Quartetto, 1956; Sincronie, 1964; Notturno, 1993; Glosse, 1997) and even the piano, an instrument redolent of traditional connotations which he subjected to new aural, formal and expressive criteria in a series of works starting with Sequenza IV (1966) and culminating with Sonata (2000).

Berio’s musical research is characterised by his attainment of an equilibrium between a keen awareness of tradition and a propensity to experiment with new forms of musical communication. In his various creative phases the composer invariably tried to relate music to various fields of knowledge: poetry, theatre, linguistics, anthropology and architecture. His interest in the multiple expressions of human musicality led him to return again and again to various repertories of the oral tradition (Folk songs, 1964; Questo vuol dire che…, 1968; Cries of London, 1974-76; Voci, 1984). He explored the vast patrimony of Western music in his adaptations of Monteverdi (Combattimento di Tancredi e Clorinda), Bach (Contrapunctus XIX), Boccherini (Ritirata notturna di Madrid), Mozart (Vor, während, nach Zaide), Schubert (Rendering), Brahms (Op. 120 N. 1), Mahler (the two cycles of Frühe Lieder), Puccini (the Finale of Turandot), and more besides. His ideal of uniting the various dimensions and traditions of successive civilizations can also be seen in such works as Sinfonia (1968), Coro (1975-76) and Ofanìm (1988-92), this last work preparing the ground for his last two theatrical works.

Music theatre constituted a fundamental focus for Berio’s research and poetics. After the first works for the stage in the fifties and sixties (Allez-Hop, Passaggio), he conceived his first musical action organized in three acts with texts he wrote himself: Opera (1969-70/1977). This was followed by La vera storia (1977-79), text by Calvino, Un re in ascolto (1979-83) with texts by Calvino, Gotter, Auden and Berio, Outis (1992-96) with texts by Dario Del Corno, and Cronaca del Luogo (1997-99) with a text by Talia Pecker Berio. A special place was occupied by A-ronne (1974-75), a radio documentary for 5 actors (reworked in 1975 for 8 voices) with a text by Sanguineti, the culmination of the experimentations for radio that Berio undertook in the fifties.

Luciano Berio died in Rome on 27 May 2003. In his last work, Stanze (2003, for Baritone, three men’s choruses and orchestra, with texts by Celan, Caproni, Sanguineti, Brendel and Pagis) he gave voice to a last, intimate compendium of his own expressive credo.

Berio’s commitment to music extended to other activities including conducting, the conception of concert series and the promotion of contemporary music (notably «Incontri Musicali», a journal and series of concert cycles inaugurated in 1956). He taught at prestigious musical and academic institutions in Europe and the USA (Darmstadt, Dartington, Tanglewood, Mills College, Juilliard School, Harvard University). In 1993-94 he gave the Charles Elliot Norton Lectures at Harvard. From 1974 to 1980 he directed the department of electroacoustics at the IRCAM, Paris, and in 1987 he founded the Centro Tempo Reale in Florence. He was the recipient of numerous international awards (Siemens Prize; Wolf Foundation Prize; Leone d’Oro alla Carriera, Venice Biennale; Imperial Prize for the Arts, Japan) and four honorary degrees (from City University, London and the Universities of Siena, Torino and Bologna). From 2000 he was President of the Accademia di Santa Cecilia in Rome where, under his supervision, the new Auditorium Parco della Musica was inaugurated in 2002.