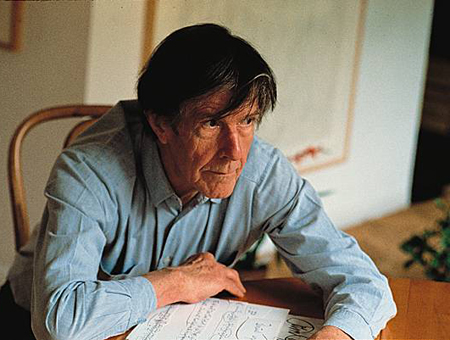 Famously described by his teacher Schoenberg as ‘an inventor of genius’, possibly no other composer in the history of music has provoked such extremes of veneration and contempt as John Cage. Yet today he is widely regarded as the most influential American composer of the last century, and pop art, concrete poetry, performance art, conceptual art and minimalism all owe something to his oeuvre.

First Construction (in Metal) (1939), his first mature work, ushered in a remarkable sequence of compositions in the 1940s similarly written for the idiosyncratic medium of percussion ensemble or ‘prepared piano’, an instrument Cage invented by inserting objects between the piano strings to give each note its own unique timbre.

Throughout the 1940s a burgeoning interest in Eastern philosophy saw him initially immersing himself in South Asian writings, followed by an even more revelatory encounter with East Asian philosophy, Zen in particular. Cage’s studies helped to nurture his belief in the principle of non-involvement, in which a renunciation of control is made possible by the use of indeterminacy and chance. His ideal was to discover a compositional process that would destroy any conventional sense of musical continuity: ‘giving up control so that sounds can be sounds’, as he put it.

In his works of the 1950s Cage, together with three younger American composers with whom he formed an especially close association – Earle Brown, Morton Feldman and Christian Wolff – explored the seemingly endless possibilities that chance procedures offered. To this end, he chose from a wealth of randomising means, notably the I Ching in both the epic four-volume Music of Changes (1951) for solo piano and Imaginary Landscape No. 4 (1951) for 12 radios; the imperfections on manuscript paper in Music for Piano (1952–6); maps of the heavens in Atlas eclipticalis (1961–2) for orchestra; and the computer in HPSCHD (1967–9) for seven harpsichords and tape.

The ne plus ultra of Cage’s new aesthetic, the notorious 4’33” (1952) for any instrument or group of instruments, is a work in three movements, each of which is marked ‘tacet’: any sounds that might be heard during the course of this ‘silent’ piece – noises made by the audience, environmental sounds and so on – are left entirely to chance.

But to infer that every Cage score post-4’33’’ is some kind of free-for-all would be entirely mistaken. Cage, the indubitable magister ludi of 20th-century music, still established the rules for each piece – rules that might represent no more than a loose framework, as in the extraordinary multimedia work Roaratorio (1979), or on the other hand might result in a fully-notated work such as the dazzlingly virtuosic Freeman Études (1977–80) for solo violin.