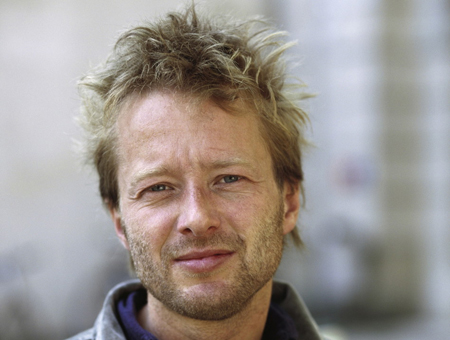 Born in Innsbruck in 1974, the composer Johannes Maria Staud draws much of his inspiration from literature and the visual arts. Reflections on philosophical questions, social processes, and political events also influence his compositions. His artfully constructed works possess a rigorous dramaturgy.

Johannes Maria Staud studied musicology and philosophy in Vienna before continuing his compositional studies with Hanspeter Kyburz in Berlin. In 2002, just one year after graduating, he won the Erste Bank Composition Prize; in 2003 he received the International Rostrum of Composers prize, followed by the Ernst von Siemens Composers’ Prize in 2004 and the Schleswig-Holstein Musik Festival’s Paul-Hindemith-Prize in 2009. Prestigious commissions followed. In 2004/05 Apeiron was commissioned by the Berlin Philharmonic under Sir Simon Rattle. In 2006 Segue for violoncello and orchestra was commissioned by Heinrich Schiff and the Vienna Philharmonic under Daniel Barenboim for the Salzburg Festival.

His fascination with the work of Jewish writer and illustrator Bruno Schulz is reflected in works such as Über trügerische Stadtpläne und die Versuchungen der Winternächte (2009) and Zimt: Ein Orchesterdiptychon für Bruno Schulz. The first part of this orchestral diptych, On Comparative Meteorology, was premiered in its original version in 2009 by the Cleveland Orchestra under Franz Welser-Möst, and in the revised version in 2010 by the Vienna Radio Symphony Orchestra under Peter Eötvös; the second part, Contrebande (On Comparative Meteorology II), was commissioned by Pierre Boulez for the Ensemble Modern and premiered in 2010. In 2012 orchestral work Maniai had its world premiere with the Bavarian Radio Symphony Orchestra in Munich under the Mariss Jansons. He was also “composer in residence” of the Staatskapelle Dresden that same year.

Major ensemble works of recent years include Auf die Stimme der weißen Kreide (Specter I-III), which premiered at the Festival Musica in Strasbourg in 2015, and the diptych Par ici – Par là, performed for the first time in full by the Ensemble Intercontemporain at the Acht Brücken festival in Cologne. The violin concerto Oskar (Towards a Brighter Hue II), written for Midori, premiered in 2014 at the Lucerne Festival, as did the opera Die Antilope based on a libretto by Durs Grünbein. Grünbein also provided the textual template for Der Riss durch den Tag (2011), a monodrama for Bruno Ganz, and for the opera Die Weiden, which premiered in 2018 at the Vienna Staatsoper. Once again the two reflect on current political tendencies, this time telling the story of a young couple embarking on a river journey, “into the heart of darkness” – into the heart of Europe, a newly fractured continent.

The composer’s most recent orchestral work, Stromab (“Downstream”), was premiered in 2017 by the Royal Danish Orchestra with its new chief conductor Alexander Vedernikov, with subsequent engagements in Vienna (Vienna Symphony Orchestra under Francois-Xavier Roth), Cleveland and New York (both with the Cleveland Orchestra under Franz Welser Möst). The 2018/19 season began with another major orchestral work: Scattered Light, inspired by John Cage and the New York School. Without a conductor, the Vienna Philharmonic premiered the work as part of the Vienna Modern’s season opening concert, followed by a guest performance in Berlin.

The 2019/20 season kicks off with the world premiere of Terra pinguis, a work inspired by medieval alchemy for the Munich Chamber Orchestra. The current season also features new works for the Boulanger Trio (Kasseler Musiktage), a trio for the multi-percussionist Martin Grubinger (Vienna and Cologne), a new ensemble work for the Ensemble Phace, and a miniature for Rudolf Buchbinder on the Diabelli Variations.

Johannes Maria Staud is Professor of Composition at the Mozarteum University in Salzburg since autumn 2018.