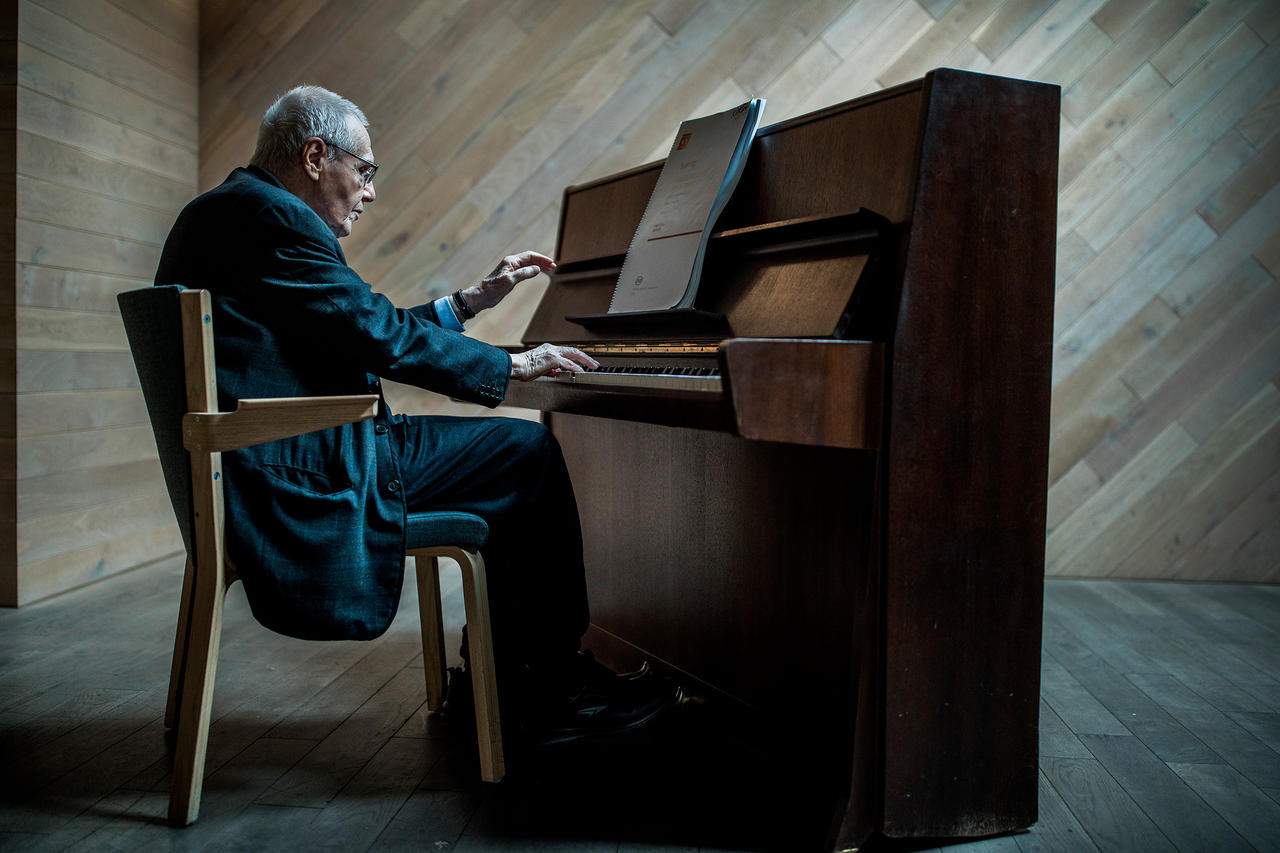 Born in Romania in 1926, György Kurtág studied piano from 1940 with Magda Kardos and composition with Max Eisikovits. He moved to Budapest in 1946, where he studied composition with Sandor Veress and Ferenc Farkas, piano with Pál Kadosa and chamber music with Leo Weiner.

Unlike his friend Ligeti, he remained in Hungary where almost all of his works were premiered until the 1980s. He did, however, spend some time in Paris in 1957-1958, where he studied with Marianne Stein and took classes with Olivier Messiaen and Darius Milhaud. These influences, along with those of the Concerts du Domaine musical directed by Pierre Boulez, imbued him with the techniques of the Vienna School: Arnold Schoenberg and Anton Webern, and Karlheinz Stockhausen’s Gruppen. This stay in Paris had a profound effect on his ideas on composition. The first work he wrote back in Budapest, the String Quartet, is called Opus No. 1.

From 1967 until his retirement in 1986, he was professor of piano and chamber music at the Budapest Academy, and he continues his work as a teacher to this day. The cycle of piano pieces for children, Játékok (1973-1976) (games), is a testament to his commitment to teaching and to a new pedagogical approach.

Most of Kurtág’s works are devoted to the small form, as shown by the title of the cycle for quartet Microludes (1977-1978). In particular, he composed small pieces for the voice, which he saw as an instrument with new possibilities that went beyond its usual narrative or operatic role. These small pieces are often gathered in cycles: Messages from the late Demoiselle Troussova for soprano and ensemble (1976-1980), Les Propos de Peter Bornemisza, opus 7 (1963-1968). Semantics is at the center of the composer’s concerns. The music he composed for the poems of Pilinszky, Dalos, Kafka, Beckett, emphasizes as much as possible the declamatory aspect of the literary work and the unity and intelligibility of the text.

Chamber music is also, for the composer who has always taught it, a favorite field. He often used the cymbalum, a traditional Hungarian instrument: Duos (1960-1961), Szálkák (1973).

With the exception of a few works, such as Stele (1994), for large orchestra commissioned by Claudio Abbado, and …Concertante … op. 42 for violin, viola and orchestra (2003), Kurtág rarely approaches large-scale orchestral works, preferring small numbers and short forms for his work on the search for the essential and dramatic efficiency in a certain simplicity.

An honorary member of several academies in Europe and the United States, and a guest artist in residence in many European cities, György Kurtág has received numerous awards, including the Ernst von Siemens Prize in 1998 and the Grawemeyer Award for …concertante…, Op. 42 in 2006.