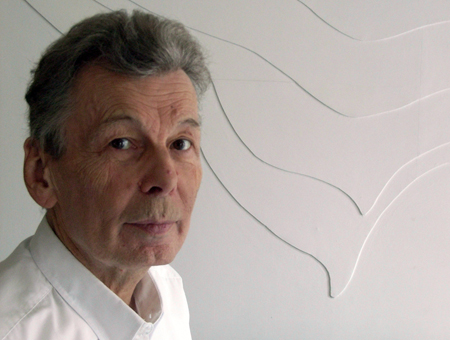 Georges Boeuf, born in Marseille in 1937, studied at the Conservatoire national de région of this city. His first compositions are purely instrumental.

In 1969, he was one of those who were to set up electroacoustic music centers in France, co-founding the Groupe de musique expérimentale de Marseille (GMEM), of which he has been president since 1974, which became the National Center for Musical Creation under the direction of Raphaël de Vivo.

In 1988, he created the composition class of the Conservatoire national de région de Marseille, directed at the time by Pierre Barbizet, an establishment in which he had previously taught musical training, sound technique and organology.

His catalog currently includes about a hundred instrumental, vocal, electroacoustic or mixed works, as well as works for the stage and the cinema.

Georges Bœuf composed Le Chant de la nature for the permanent exhibition of the renovated large gallery of the Muséum national d’Histoire naturelle de Paris and the opera Verlaine Paul, premiered at the Nancy Opera in October 1996 with François Le Roux in the title role, and revived at the Marseille Opera-Théâtre de la Criée in a new staging by Frédéric Bélier-Garcia.

His last works : Quatuor à cordes created by the Quatuor Parisii, Orbes for 12 strings, created by the Orchestre royal de Wallonie, Septimo (1998) for vibraphone and bells, recorded by Frédéric Daumas (Fragrance, 1999), Le Prophète, based on a text by Mallarmé, for baritone and piano (1998), created by François Le Roux and Alexandre Tharaud at the Grande Bibliothèque in Paris, Solitaire Vigie for large orchestra and choir (poem by Mallarmé) created in Nancy in January 2000, Variasix for instrumental ensemble created by the Télémaque ensemble (Aix-en-Provence, 2001), Koré ou L’Oubli for keyboard-percussion quartet in 2002, created by the Symblêma ensemble, Sonata for violin created by Nicolas Miribel, Six Monodies de l’absence for tenor saxophone, created by Joël Versavaud, Dans le bruit du monde for choir, created by the Contemporary Choir with Roland Hayrabedian, Messe des cendres.