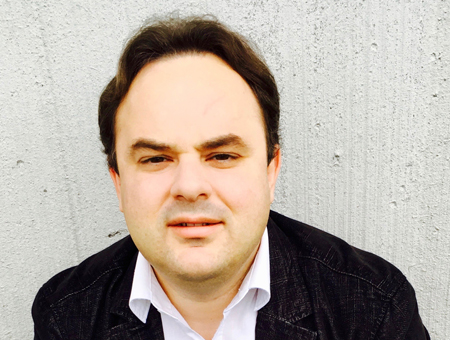 Evis was born in Cyprus in 1979, where he had his first musical lessons at the age of six. By the age of sixteen, he had already obtained both the LRSM and the Performance and Teaching Diploma with distinction before moving to England in 1998 for university studies.

Upon graduation from the University of Hull with a first class degree (BMus) in all disciplines and the Departmental Prize, he completed his PhD studies in Musical Composition at the University of York under the supervision of Dr Thomas Simaku in 2006. Evis has also furthered his studies at world-renowned festivals, seminars and workshops, including Darmstadt, IRCAM, Royaumont and Tanglewood as a composition fellow, and worked with leading composers such as Brian Ferneyhough, Georges Aperghis, George Benjamin, Johannes Schollhorn and Augusta Read Thomas.

Following his PhD studies, Evis was awarded a Wingate Foundation Scholarship (2005–2007) to pursue his compositional research more independently, whilst teaching Composition and Orchestration at Nottingham University (2005–2007) and guitar performance at York University (2002–2007).

Evis Sammoutis’ works have been commissioned by festivals and organizations, such as Venice Biennale, Klangspuren, Royaumont, Barlow Endowment, Ernst von Siemens Foundation, Chamber Music America and ARD; performed at leading festivals and contemporary music series, such as Tanglewood, MusicNOW, Gaudeamus, Music of Today and ISCM, in more than forty countries throughout Europe, America, Africa and the Far East and broadcast on several national radio stations throughout Europe, America and the Far East, such as BBC Radio 3, SWR2, Radio France and RAI3.

Evis is currently Assistant Professor of Composition at Ithaca College, NY and he is also the Co-founder and Artistic Director of the Pharos Arts Foundation International Contemporary Music Festival, established in 2009.