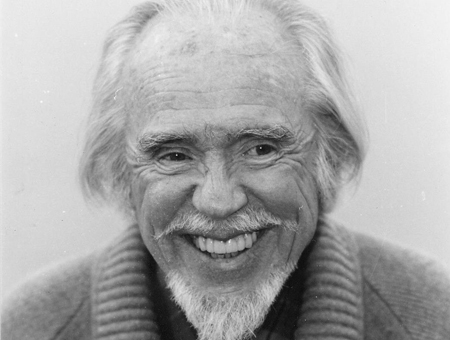 Conlon Nancarrow was an iconoclastic American composer who wrote in an utterly new way using new instrumental resources. While isolated from the main currents of music, he was virtually ignored by the public and his colleagues until the 1970s. In the 1980s composer György Ligeti said Nancarrow was writing “the best music by any living composer.” In his early years Nancarrow played jazz trumpet and enrolled in the Cincinnati College-Conservatory of Music in 1929. He later relocated to Boston for private study with Nicolas Slonimsky, Walter Piston, and Roger Sessions. Nancarrow cites his study of counterpoint with Sessions as his most important formal training. He also studied Indian and African music with Henry Cowell in New York. At the outbreak of the Spanish Civil War in 1937, Nancarrow joined the Lincoln Brigade, an organization of Americans fighting for the Loyalists against General Franco. Upon his return to the United States in 1939, the State Department confiscated his passport for “communist associations.” Outraged and fearing persecution, he went to Mexico City, not returning to the States for the next 40 years. He took Mexican citizenship in 1956.

Nancarrow is primarily known for his 50 studies for player piano, which combine a quasi-improvisatory likening to jazz pianists Art Tatum and Earl Hines, with dazzling rhythmic complexity rendered at tempos that exceed the capabilities of human performers. Nancarrow adopted the player piano as his instrument of choice because of its ability to exactingly reproduce his complex rhythmic layers — sometimes up to 12 layers simultaneously — and because of his relative isolation from performers while in Mexico. Nancarrow obtained a player piano in the 1940s and began laboriously hand-punching each note onto a piano roll, ultimately producing completed compositions.

Although in 1969 Columbia released an LP of several of his etudes, Nancarrow took no effort to promote his work until he was 59 years old. Motivated by a desire to show his teenaged son that he hadn’t wasted his life, he visited the United States in 1981 to participate in the New American Music Festival in San Francisco. In 1982 he was composer in residence at the Cabrillo Festival, and subsequently toured in Europe. In 1982 he won a MacArthur Award (the so-called “genius grant”).

Interest in his music increased in the 1980s. Some musicians began to transcribe the piano rolls into conventional musical notation. Guided by the rolls in grasping the rhythmic complexity, pianists Robert MacGregor, Joanna MacGregor, and Ursula Oppens began to perform some of the etudes. The dry wit and frequent warmth of the music comes through in live performance as they never have on a mechanical piano. Some of the more complex works have been arranged for two pianos or chamber ensembles by Yvar Mikhashoff, and played by such groups as the Arditti Ensemble and Ensemble Moderne.

Nancarrow’s piano rolls and the player pianos were bought by the wealthy conductor and music collector Paul Sacher. Thus they have remained intact and archived together in the Sacher Foundation’s extensive and well-protected archive of original musical documents.