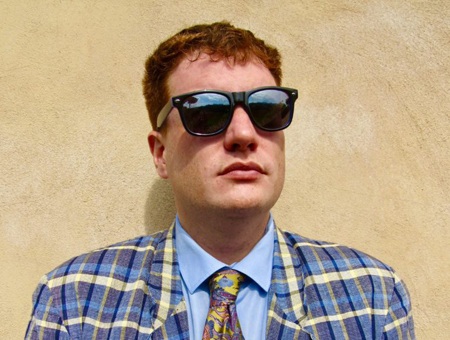 Consonance is a central preoccupation; microtonality and just intonation are often employed. Timbral explorations are also manifold, from experiments with a wide range of mutes and preparations to an unusual instrumentarium, with works that call for custom electric guitars, dulcimer, qanûn, stroh violin, and retuned autoharps. Several of Christopher’s compositions bear the mark of his training in literature, influenced by novelists and poets including Thomas Pynchon, Geoff Dyer, and C. P. Cavafy. Many recent works also incorporate an idiosyncratic use of electronics, expanding the possibilities of color, pitch, and timing beyond the acoustic realm.

Christopher Trapani was born in New Orleans, Louisiana in 1980. He holds a Bachelor’s degree from Harvard College, where he studied composition with Bernard Rands and poetry under Helen Vendler. He spent most of his twenties overseas: a year in London, working on a Master’s degree at the Royal College of Music with Julian Anderson; a year in Istanbul, studying microtonality in Ottoman music on a Fulbright grant; and seven years in Paris, where he studied with Philippe Leroux and worked at IRCAM. Christopher is currently based in New York City, where he recently completed a doctorate at Columbia University, studying with Tristan Murail, Georg Friedrich Haas, Fred Lerdahl, and George Lewis.

Christopher is the winner of the 2016-17 Luciano Berio Rome Prize, as well as the 2007 Gaudeamus Prize, the first American in over 30 years to win the international young composers’ award. Other honors include a Charles Ives Scholarship from the American Academy of Arts and Letters (2015), the Julius F. Ježek Prize (2013), three Morton Gould Young Composers Awards from ASCAP (2005, 2006, and the Leo Kaplan Award in 2009), and a BMI Student Composer Award (2006).

Recent commissions have come from the BBC, the JACK Quartet, Ensemble Modern, and Radio France, and his works have been heard at Carnegie Hall, the Venice Biennale, Southbank Centre, Ruhrtriennale, IRCAM, Ravenna Festival, and Wigmore Hall. In March 2011, Christopher was featured in a portrait concert on the Philharmonia Orchestra’s Music of Today series at the Royal Festival Hall in London.

His debut CD, Waterlines, featuring performances by Talea Ensemble, JACK Quartet, and others, was released on New Focus Recordings in 2018. A second recording of Waterlines by ICTUS was released in 2020.

Christopher is a 2019 fellow of the John Simon Guggenheim Memorial Foundation, and a winner of a 2019 Fromm Commission from Harvard University