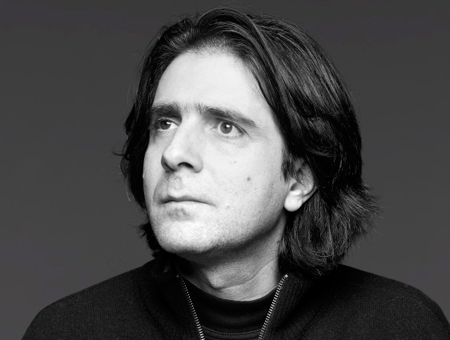 Greek composer and improviser, born in 1965

Alexandros Markeas was born in Athens in 1965 and studied piano and music theory at the National Conservatory of Greece and later at the Conservatoire National Supérieur in Paris where he obtained a degree in piano and chamber music. In parallel to his promising career as a concert pianist playing improvisation pieces, he continued his studies specialising in composition.

He studied under Guy Reibel, Michael Levinas and Marc-André Dalbavie. After graduating in counterpoint, fugue and composition, he was admitted to I.R.C.A.M where he continued his studies in composition and electronic music and he also attended the Aix-en-Provence Festival Composition Academy.

His work is defined by his desire to decode and change musical perceptions by bringing music in contact with different fields of artistic expression such as architecture, visual arts and the theatre. He also takes his inspiration from new forms of expression that have emerged from the world of visual arts (installations, performances, events, videos), to create situations where listening to music becomes an unusual and specific experience. He has created audio visual installation projects for instance (Timescope (200 – Villa Medici) in partnership with the artist Laurent Berger, Concerto Spaziale (2003 – with Eriko Momotani, Concerto Spaziale 2 (2004 – at the CNR of Poitiers, La Voix et ses avatars 2006 – in the ARCAL studios) by imagining the route along which the audience could invent their own formal progression and create their own musical universes by choosing among the many different elements offered.

His philosophy regarding the mechanisms of perception and decoding music took him to the world of theatre and he collaborated with different directors (Jean-François Peyret on Le traité des forms) and with the Ars Nova ensembles, partners who, like him wanted to explore theatrical aspect that is inherent in music (2004 – Joyeux anniversaire with Claire Lasne, 2006 Narcisse with Jean Boillot).

He dedicates a great deal of his time and considerable talent to working on unusual and original improvisation works and studies. He also composes his own works and specialises in multimedia projects.

He has been commissioned to produce and perform pieces for the French Republic, Radio France, the Royaumont Foundation, the Louvre Museum, Manca, and the Couperin Festivals. Several of his multimedia projects have been sponsored by the DRAC (Regional Department of Cultural Affairs) of the Ile-de-France District Council, Paris Town Council and the Romaeuropa Festival.

Between 2000 and 2005, he worked with the director Jean-François Peyret on a long-term theatre project: Le traité des formes.

He is a keen teacher and has written a great number of original pieces for young people and amateur orchestras.

A few milestones along his career:
1999: composer-in-residence at the Académie de France in the Villa Medici in Rome.
2001: SACEM Hervé Dugardin Award.
2006: Critics’ Union Award.
2009: SACD award
2003: appointment as teacher of improvisation at the Paris Conservatoire National Supérieur.