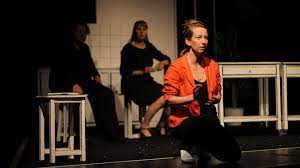 Since 2007, she has been assisting Sylvain Maurice in directing at the CDN of Besançon and Sartrouville. She participated in the creation of The Witches by Roald Dahl in which she also plays, Peer Gynt by Ibsen, Bidules Trucs by Pierre Notte, The Fall of the House of Usher by Edgar Poe, Dansékinou – musical tale by Jérôme Ruillier and Jonathan Pontier and Muziekweek and the Lucerne Festival.

Since 2013, she works with Simon Delattre and the Rodeo Theatre. Together they “commit” on stage Bouh! by Mike Kenny and she plays in Poudre Noire by Magali Mougel. She performs for the puppet company Créatures cie and for the digital arts company OMProduck. In 2011 she directed the contemporary opera Antti Puuhaara by Tapio Tuomela with the Ensemble Musicatreize of Marseille. She also worked in Montreal with the artist Cléa Minaker whom she directed in a visual solo based on William Blake’s The Book of Thel in 2013.

The same year, Aurélie created her puppet theater company, Méandres, in Charleville-Mézières, with which she develops a personal creative work that combines literature, puppets and animated forms. La Chevelure, an adaptation of Maupassant’s short story, is the company’s first small solo show. Aventures de la Vie Matérielle based on Marguerite Duras, her latest creation, is currently on tour.