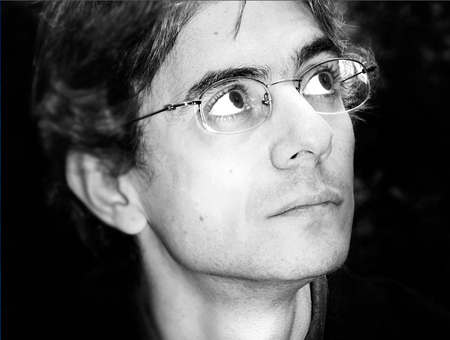 Alberto Posadas was born in Valladolid (Spain) in 1967. After his studies in his hometown, he moved to Madrid to study composition with Francisco Guerrero. From his first works he showed interest in the relationship between music, nature and mathematics as a means of exogenous models applying to the composition process. Nonetheless, his determination and constant search for the integration of aesthetics in these procedures led him to employ other “models” of composing such as the translation of architectural spaces into music, the application of topology and painting techniques or the exploration of the acoustic features of instruments at a micro level.

In 2002 he received the Audience Award at the festival Ars Musica Bruxelles. He was selected by the Ircam reading panel (edition 2003/04), an institution with which he still keeps a close collaboration. He had a bursary at Casa de Velázquez (Madrid) in 2006. In 2011 he received the National Music Prize, awarded by the Spanish Ministry of Culture. In 2014 he also was awarded a stipend by the Free State of Bavaria (Germany) as artist in residence at the Internationales Künstlerhaus Villa Concordia in Bamberg. In 2016 he has been nominated as a fellow by the Wissenschaftskolleg in Berlin. The recording of his cycle for string quartet Liturgia fractal received the prize Diapason d’Or in 2009.

His music has been performed throughout the world by some of the most prestigious performers, such as Klangforum Wien, Ensemble Intercontemporain, Quatuor Diotima, Ensemble Court-­‐circuit, Ensemble Itinéraire, Nouvel Ensemble Modern, Ensemble Vocal EXAUDI, SWR Sinfonieorchester Baden-Baden und Freiburg, Orchestre Philharmonique du Luxembourg or the Orchestre national de France, amongst others.