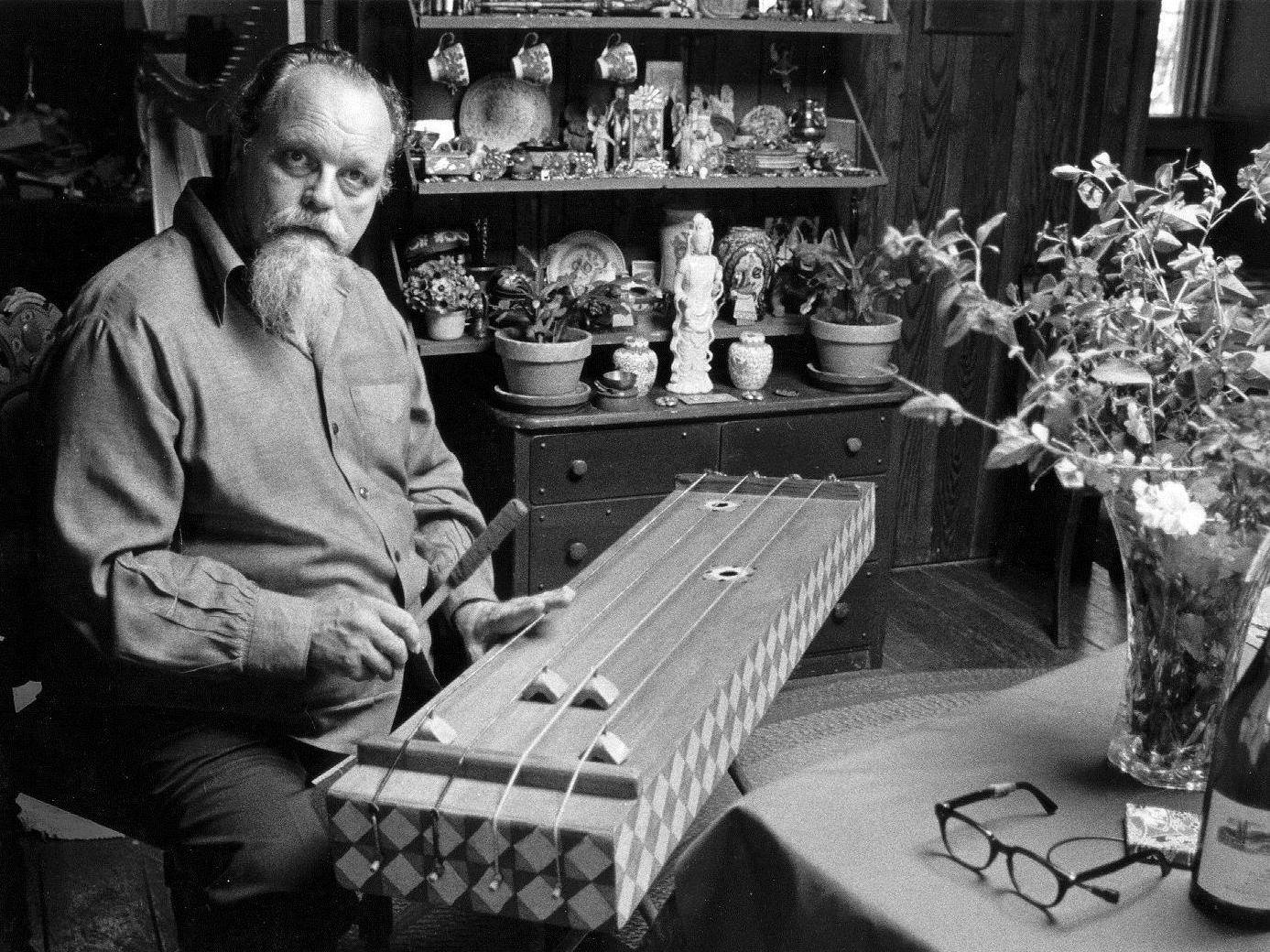 Lou Silver Harrison was born on May 14, 1917 in Portland, Oregon, where he lived until the age of nine. His father’s professional instability forced the family to move frequently to northern California. The young boy had a disjointed education but received a rich and varied artistic education, including piano and dance lessons. Harrison graduated from Burlingame High School in December 1934 and moved to San Francisco the following year. For seven years, until the summer of 1942, he explored in depth the entire Western musical repertoire, while developing a great interest in traditional Asian music. In 1935, he entered San Francisco State College where, for three semesters, he studied horn, clarinet, harpsichord, recorder, and sang in several vocal ensembles. He composed Six Sonatas for Harpsichord (1934-1943) and Mass to St. Anthony (1939-1952). At the University of California in San Francisco, he took the course “Music of the Peoples of the World” taught by Henry Cowell, of whom he quickly became the assistant, the student in composition and the friend. Thanks to Cowell, he came into contact with Charles Ives and Carl Ruggles, with whom he also maintained privileged friendly and artistic ties. From 1937 to 1942, Harrison worked as a piano accompanist in the Dance Department at Mills College in Oakland and, during the summer sessions, taught dance composition – Harrison returned to Mills College in 1980, this time as a professor of composition in the Music Department. In 1938, he met John Cage. From 1939 to 1941, they organized a series of percussion concerts together on the Mills College campus and in the San Francisco Bay Area, where several compositions were performed, including Double Music (1941), for percussion quartet, written in collaboration with Cage. In August 1942, Harrison moved to Los Angeles. He attended Arnold Schoenberg’s composition seminar at the University of Los Angeles (UCLA) and composed the serially influenced Piano Suite (1943).

In the summer of 1943, Harrison moved to New York. He contributed to the magazine New Music, then assisted Virgil Thomson as music critic for the New York Herald Tribune. On April 5, 1946, he conducted the world premiere of Charles Ives’ Symphony No. 3. But under the effect of the hectic and noisy life in New York, he suffered a severe nervous breakdown and was hospitalized for nine months. He continued to compose, however, notably The Perilous Chapel (1949) and Solstice (1950). During the summers of 1949 and 1950, he was Music Director of the Reed College Festival of Music and Theater in Portland and composed the incidental music for Marriage at the Eiffel Tower (Jean Cocteau) and The Only Jealousy of Emer (William Butler Yeats). From 1951 to 1953, he was in residence at Black Mountain College, where he taught harmony, counterpoint and intonation theory. In 1952, he received his first Guggenheim Fellowship and composed the opera Rapunzel.

Harrison returned to California in the summer of 1953 and settled the following year in Aptos, a small rural community south of Santa Cruz. He earned his living as a piano accompanist, but also worked at various jobs, including forest firefighter and animal nurse. His financial precariousness was alleviated by a second Guggenheim Fellowship (1954), a grant from the Fromm Foundation and a commission from the Louisville Orchestra (1955), which resulted in the composition of Strict Songs (1955), for eight baritones and orchestra. In 1959, he was in residence in Buffalo, where he completed his Violin Concerto with Percussion Orchestra.

In April 1961, thanks to a Rockefeller Fellowship, Harrison attended the East-West Music Meetings in Tokyo. Immediately after these meetings, he spent two months in Korea. The following year, he returned to Seoul for nearly four months, then spent three weeks in Taiwan. During these trips, he studied local music and instruments, which inspired works combining Western and Asian instruments, such as Nova Odo (1961-1968), Pacifika Rondo (1963) and the Concerto for pipa (1997). In 1966, Harrison spent six months in Oawaca, Mexico. The following year, he met William Colvig, an electrical engineer and music lover, who was his collaborator and companion until Colvig’s death in 2000. During their thirty-three years together, they lived in a straw house in Aptos. Together they built instruments including their instrumental ensemble, the American Gamelan, also known as the Old Granddad, which Harrison used notably in his second opera, Young Caesar (1971-2000).

In the 1960s and 1970s, Harrison presented hundreds of concerts of traditional Chinese and Korean music throughout California. He furthered his study of various intonation systems, which he taught at the Berkeley World Music Festival in 1975. In 1976, he also studied gamelan music, and the following year began composing for authentic gamelans, which he often combined with Western solo instruments, as in the Double Concerto for Violin, Cello and Gamelan (1981-1982) and the Piano Concerto with Javanese Gamelan (1987). In 1983, he visited Indonesia for the first time, taking advantage of a trip to New Zealand to make a detour to Java. Lou Harrison died of a heart attack on February 2, 2003, on his way to Columbus, Ohio, to attend a festival dedicated to his music.