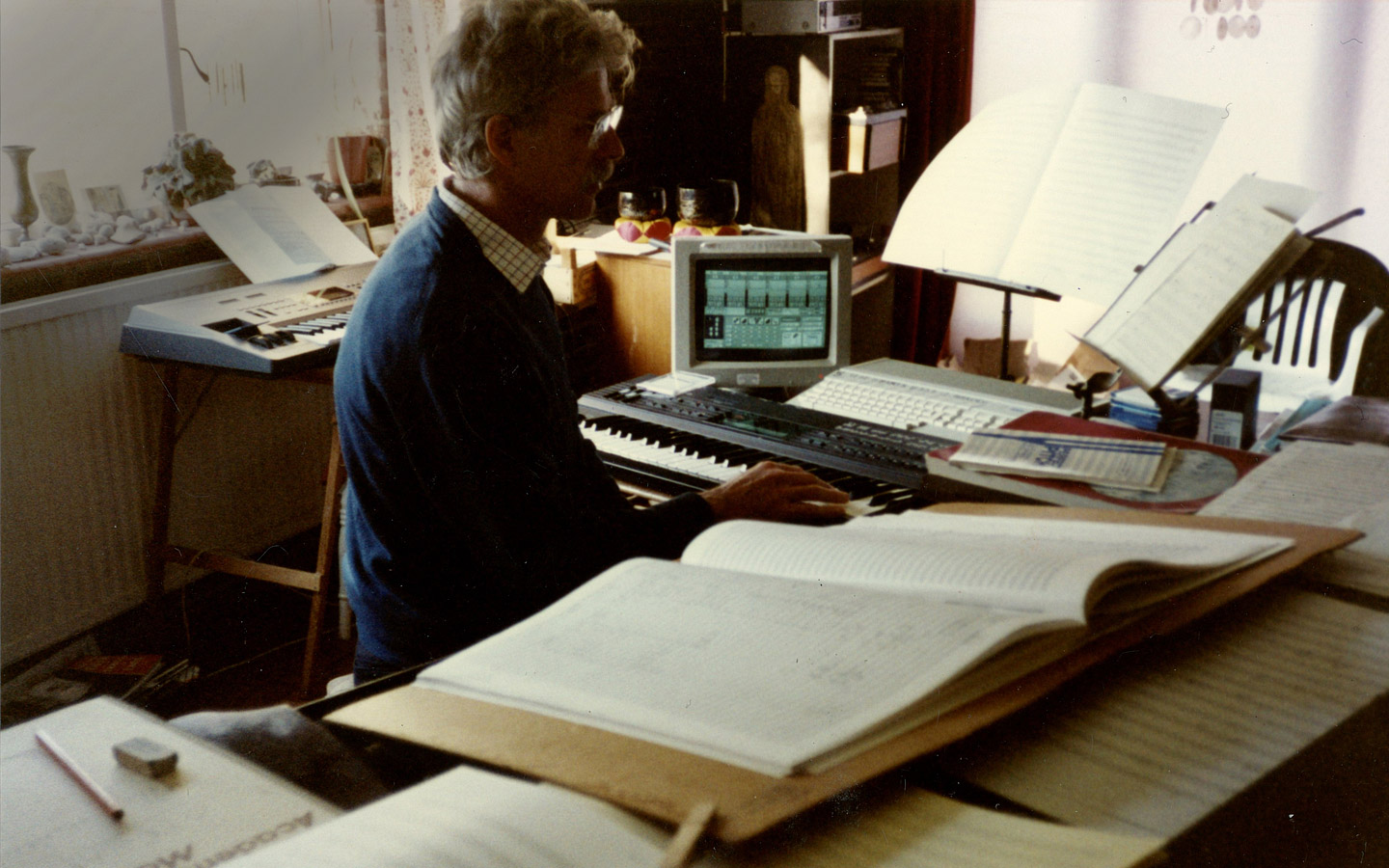 Born in Warwickshire (England) in 1939, Jonathan Harvey was a chorister at St. Michael’s College in Tenbury and then studied music at St. John’s College in Cambridge. After receiving his doctorate from the universities of Glasgow and Cambridge, he studied composition with Erwin Stein and Hans Keller, both students of Schoenberg, on the advice of Benjamin Britten. He thus became familiar with the dodecaphonic technique. From 1969 to 1970, he was a Harkness Fellow at Princeton University where his meeting with Milton Babbitt had a considerable influence on his work. The new technologies, still in their infancy at the time, opened him up to an avant-garde compositional dimension: the exploration of sound. His meeting with Stockhausen was also decisive, as it guided him in his learning of studio techniques. Their ideas converge on the fact that electronic techniques allow to transcend the physical limits of traditional sound sources. These composers are both in search of a rapprochement between the rational and the mystical, the scientific and the intuitive. In 1975, Jonathan Harvey published a book on the work of Stockhausen.

In the early 1980s, Pierre Boulez invited Jonathan Harvey to work at Ircam, where he produced Mortuos Plango, Vivis Voco (for tape), Bhakti (for ensemble and electronics), Advaya (for cello and electronics) and String Quartet No. 4 (with live electronics). He also became familiar with the spectral current, which he considers to be a determining factor in the evolution of today’s music. Furthermore, he sees electronic sound as an opening to transcendental and spiritual dimensions.

Jonathan Harvey’s work covers all genres: music for a capella choir, large orchestra (Tranquil Abiding, White as Jasmine and Madonna of Winter and Spring), chamber orchestra (String Quartets, Black Sun/Chitra and Death of Light, Light of Death), ensemble, and solo instrument. He is considered one of the most imaginative composers of electroacoustic music. His first opera, Passion and Resurrection (1981), inspired the making of a documentary for the BBC (The Challenge of the Passion); the second, Inquest of Love, commissioned by the English National Opera, was premiered under the direction of Mark Elder in 1993; the third, Wagner Dream, commissioned by De Nederlandse Opera, the Grand Théâtre de Luxembourg, the Holland Festival and Ircam, was premiered in 2007.

Jonathan Harvey receives commissions from all over the world and is one of the most frequently programmed composers of today. His works have been performed by Ensemble Modern, Ensemble Intercontemporain, Ensemble Asko, Nieuw Ensemble (Amsterdam) and Ensemble Ictus (Brussels) in festivals such as Musica (Strasbourg), Ars Musica (Brussels), Musica Nova (Helsinki), Acanthes, Agora, as well as in numerous contemporary music centers. Nearly two hundred performances of his works are given or broadcast each year and about eighty recordings are available on CD.

Jonathan Harvey holds Honorary Doctorates from the Universities of Southampton, Sussex, Bristol and Huddersfield and is a member of the European Academy. He published two books in 1999 on inspiration and spirituality. A study of his work by Arnold Whittall was published by Faber & Faber the same year. Two years later, John Palmer published a substantial study, Jonathan Harvey’s Bhakti, with Edwin Mellen Press.

From 1977 to 1993, Jonathan Harvey was professor of music at the University of Sussex, where he remained as an honorary professor. From 1995 to 2000, he taught music at Stanford University (USA), was a visiting professor at Imperial College London and an honorary fellow of St. John’s College, Cambridge.

In 1993 he was awarded the prestigious Britten Prize for composition, in 2007 the Giga-Hertz Prize for the body of his electronic music and Speakings was awarded the Prince Pierre de Monaco Prize. He is the first British composer to receive the Grand Prix Charles Cros. Between May 2009 and May 2010, Jonathan Harvey’s work is celebrated worldwide, in concerts and festivals dedicated to him, with new recordings and portraits. The BBC Symphony Orchestra celebrates him in its turn in its Total Immersion series in January 2012.